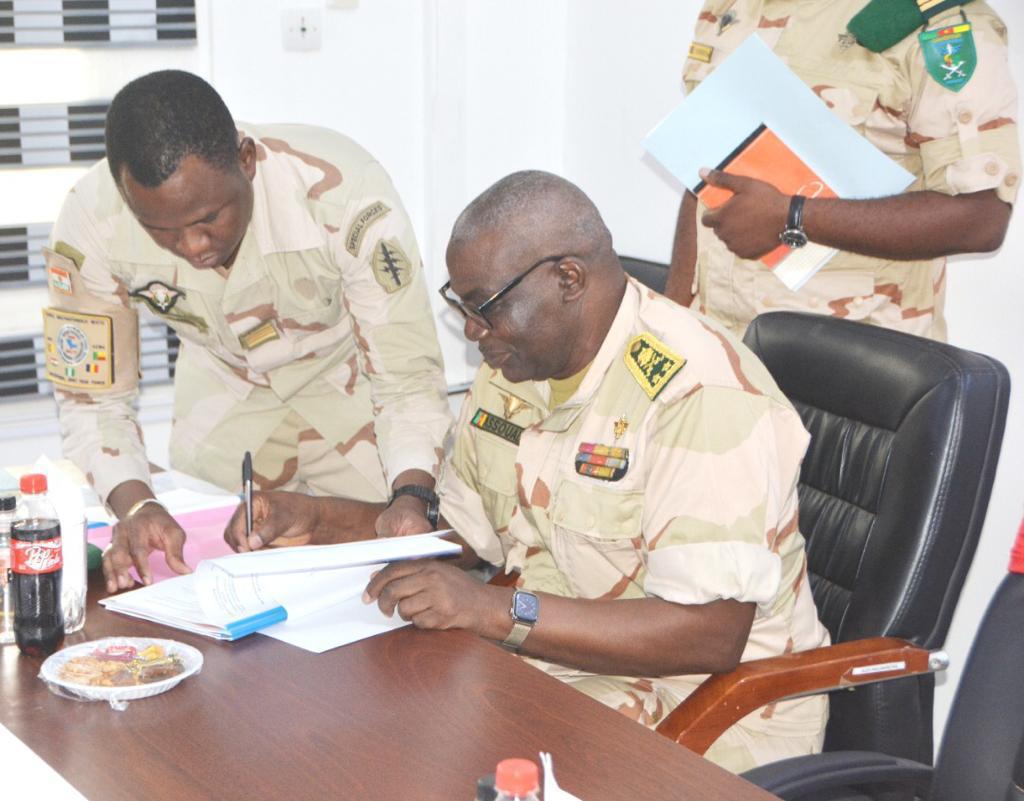 The newly appointed Deputy Force Commander (DFC) of the Multinational Joint Task Force (MNJTF), Brigadier General Assoualai Blama from Cameroun resumed duty on Friday 02 September 2022 after the outgone DFC, Brigadier General Harouna Assoumane from Niger Republic completed his tenure. The handover ceremony was presided over by the Force Commander (FC) MNJTF Major General Abdul Khalifah Ibrahim. The FC thanked the outgone DFC for his contributions to the MNJTF and wished him a safe journey back to his home country and success in his future endeavours. The new DFC in his remarks thanked the FC for the warm reception accorded him and promised to contribute positively to the success of the MNJTF. He added that though all military staff officers (MSOs) were from the different Troop Contributing Countries of Cameroon, Chad, Niger, Nigeria and Benin Republic, there was the need for all to cooperate to end the insurgency. He pledged to put in his best in fulfilling his duties as the DFC.

While welcoming the new DFC to the MNJTF family, he reminded him that it was a great honour and privilege to be appointed the DFC of the MNJTF. Adding that he came highly qualified having had previous experience commanding a formation in the general area. He informed him that 2 major Ops were carried out recently that were quite successful which led to the decimation of the terrorists within the Lake Chad Basin and in part led to the mass surrenders within the Lake Chad Basin. He reminded the new DFC that working in a multinational environment like the MNJTF required patience, discipline, tact and the spirit of cooperation adding that the founding fathers of the MNJTF saw the need for the various countries to come together to tackle the issue of terrorism and criminality working in synergy in the Lake Chad Basin. He further buttressed the point of cooperation as he said it was the key to completely ending the war against terrorism. He wished him a successful tour of duty. As part of his orientation, the new DFC was given an operational and information brief of the MNJTF while other briefings to acclimatize him to his new role were conducted. A major highlight was the decoration of the new deputy commander with the MNJTF badge signifying his assumption of office as deputy helmsman of the MNJTF.

In another development, the FC accompanied by the new DFC and other Staff Officers from HQ MNJTF paid an operational visit to HQ Sector 4 Diffa in Niger Republic on Saturday 03 September 2022. Also in attendance were the new Commander Sector 3 MNJTF ( Nigeria) Brigadier General AE Abubakar, the new Commander 19 Brigade, Brigadier General Orakwe and some of their Staff Officers.

A formal introduction of the new DFC, the new Commander Sector 3 and the new Commander 19 Brigade was done and thereafter an operational brief was given by the Commander Sector 4, Colonel Major Mamman Sani Kiao mainly on the recently concluded Operation Lake Sanity and lessons learnt. In his comments, the FC said he came to introduce the new DFC and Commander Sector 3 and to also thank the Sector Comd and his troops for their courage and doggedness in the recently concluded Operation Lake Sanity. He said the Operation was a huge success which has made the Lake Chad area safer, with daily surrenders by the insurgents and many internally displaced persons and refugees returning to their ancestral homes. He said planning for the next operations is on and would involve all stakeholders. He said the time to end this conflict once and for all is now and the conditions are right. He called for greater cooperation, discipline, and teamwork among the forces of the MNJTF. The FC and his entourage have since returned to his headquarters in Ndjamena, while other Comds have also returned to their locations safely. The visit was hitch-free and successful. (See Pictures attached)