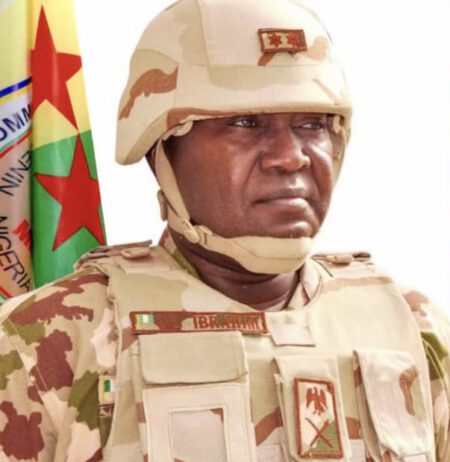 Major General Abdul Khalifah Ibrahim was born on 18 March 1968 in Kaduna into the family of Late MWO Abubakar Ibrahim Garba and Hajia Ruquyya Ibrahim Garba. He hails from Damboa LGA of Borno State. He started his primary education at Mai Musari Primary School Ngomeri Maiduguri before moving to INRI Primary School Ibadan when his uncle who he was living with was transferred to Ibadan. Thereafter, he proceeded to Federal Government College Kaduna where he earned his Senior Secondary Certificate between 1981 1986. Though, the young Ibrahim only stayed with his parents for a short while as he grew up under the tutelage of his late uncle Alhaji Ibrahim Musa Damboa, he nevertheless imbibed good qualities of patience, self-discipline, respect for elders and perseverance from his father. The bearing and uprightness of a thorough bred soldier in which he saw in his father induced his love for the military. These qualities no doubt contributed in shaping him towards becoming an outstanding general in the Nigerian Army.

Gen Ibrahim rose to his present rank by dint of hard work, courage, commitment, loyalty and foresight. He also carried with him a notable commitment to Islamic virtues of love, social justice and fairness. His loyalty to his siblings and the NA was uncompromising. These traits among others could be responsible for the foundation of his personality as a military leader and his rise to his present rank of Maj Gen in the NA.

Maj Gen Ibrahim’s interest in taking up a military career was influenced by his father who served in the military and rose to the peak of his career as a soldier in the NA and veteran of WW II (Buma Campaign) and the Nigeria Civil War before retired. This interest was actualized when he gained admission into the Nigerian Defence Academy (NDA) Kaduna in September 1987 as a member of the 39 Regular Course. He was commissioned into the rank of Second Lieutenant in 1992 in the Infantry Corps. The General attended several civil and military courses some of which include the Young Officers Course (Infantry), Company Commanders Course (Infantry) and the Anti-Tank Platoon Commanders Course at the Nigerian Army School of Infantry Jaji. He also attended the Regimental Intelligence and Security Officers Course and the Junior and Senior Staff courses at the Armed Forces Command and Staff College Jaji. Gen Ibrahim also attended the Armour Battalion Commanders Course at the Nigerian Army Armour School Bauchi and the National Defence College Course at the National Defence College Abuja.

Maj Gen Ibrahim holds a Bachelor of Science Honours (History) from the NDA and a Masters in Strategic Studies from the University of Ibadan. Until his appointment as the night GOC 7 Div NA, he had held numerous instructional, staff and command appointments. He was Platoon Commander, Intelligence Officer, Adjutant and Operations Officer at NIBATT 17 Economic Community Monitoring Group (222 Bn) and NIBATT 12 UNMIL (11 FER). He also served at the United Nation Missions in South Sudan and Liberia as a Military Observer Team Leader and Dy Sector Comd at the NIGCON Liberia. Gen Ibrahim was also the Garrison Commander of both the 13 Brigade Garrison Calabar and One Division Garrison Kaduna. He also served as the Chief Instructor Drill Wing NASI, Member Trg Team and Chief Instructor (Army Wing) at the NDA and also the commander 14 Brigade Ohafia.

Gen AK Ibrahim participated in several operations both within and outside the country. Some of which include the Economic Community Monitoring Group in Liberia and the United Nations Missions in Liberia and UNMIS UN Mission in Sudan  respectively. Others are Operations HARMONY, RESTORE HOPE and YAKI in Bakassi Peninsular, the Niger Delta area and Kaduna respectively. He is a recipient of numerous honours and awards amongst which are the Distinguished Service Star, Fellow Defence College, Field Command Medal of Honour and Operation LAFIYA DOLE medal amongst others. General Ibrahims appointments from his early military career developed his sense of responsibility, helped to develop his leadership qualities and provided him with the necessary exposure required for military leadership. Thus, it is important for future leaders to draw appropriate experience and knowledge from future appointments in the course of their career growth. This would help develop their sense of responsibility.

As Comd 1 Div Gar, he coordinated Ops that brought stability in the wake of Sectarian clashes in Zaria in December 2015 and in other parts of Kaduna State.

As Comd 14 Bde, he led operations against the then emergency threat of the IPOB within his areas of responsibility. Severely whitening down their influence and attractive to the youths in the area.  He ensure all insignia of their organization and mobilization were checkmated.

As GOC 7 Div, he improved Security within his AOR, and ensured that Maiduguri and environs were safer as no major breaches were recorded in this period, additionally, improved security situation led to resettlement of IDPs displaced for years in Ajiri, Kandri, and Ngoshe among other places.

Improved training and logistical support which translated to fraction efficiency by the Division in its operations. The few places lost were recaptured within a few days.

Married to Hajiya Halimatu Sadiya Ibrahim and the union is blessed with 4 Kids; 2 boys and 2 girls.