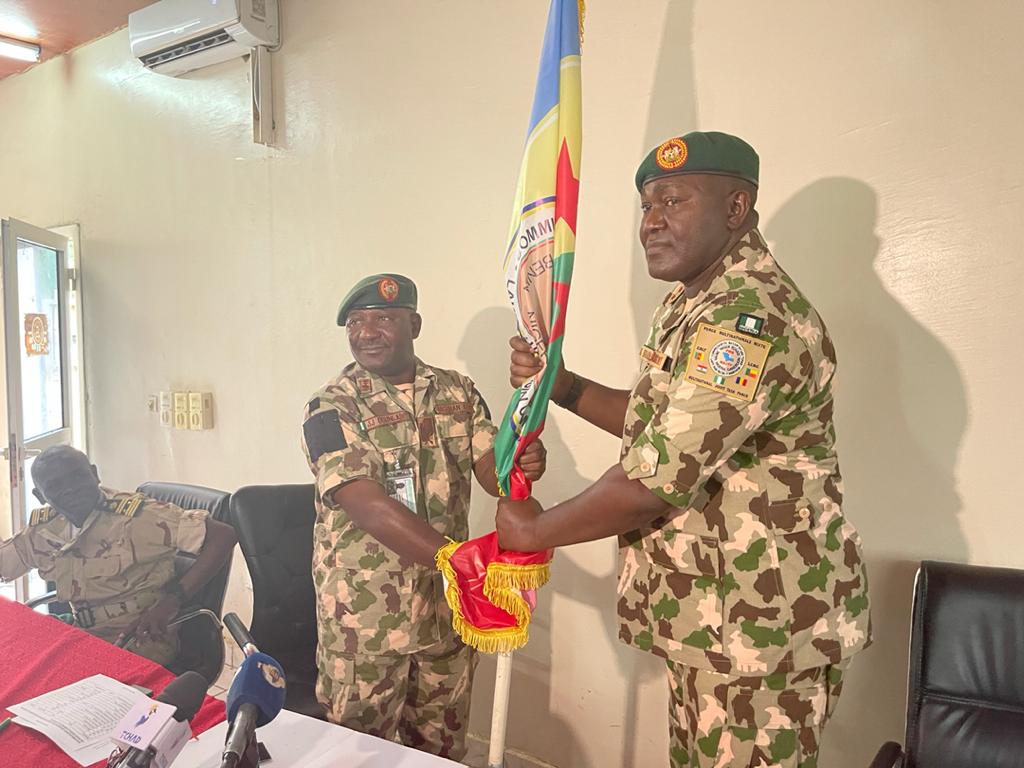 In a colourful and well attended Handing and Taking over Ceremony, the newly appointed Force Commander (FC) Multi National Joint Task Force  (MNJTF), Major General Abdul Khalifah Ibrahim took over the command of the Force from Major General JJ Ogunlade. The event took place today 6 August 2021 at the Headquarters of the MNJTF in Ndjamena , Republic of Chad. The procedure for handing and taking over involved signing of Hand over notes, handing over Command flag and decoration with the  MNJTF badges, among others.

In his remarks during the ceremony, Major General JJ Ogunlade said, the successes and milestones achieved together were the result of the mutual respect, collaboration and cooperation of all the stakeholders. He commended the contributions and outstanding performance of the officers and men of MNJTF for exhibiting professional skills in the course of their  duties. General Ogunlade urged the Military Staff Officers (MSOs) at the Headquarters to extend same support and cooperation to his successor and to always remember and support our gallant forces in the field. While acknowledging the immense support from our strategic partners, he particularly appreciated the contributions of the European Union (EU) and Centre for Coordination and Liaison (CCL) towards attainment of operational objectives in the field.

During his remarks, the new FC, Major General AK Ibrahim extolled the command and leadership qualities of Major General JJ Ogunlade, whom he described as a distinguished teacher and an accomplished general, with tremendous track records of achievements. “ I am honoured to take over command from an accomplished and seasoned infantry general like General Ogunlade“ he added. Speaking further, General Ibrahim said, that the time has come to redouble efforts and employ new strategies to end the menace of Boko Haram Terrorists/ISWAP in Lake Chad region. He called for more cooperation, teamwork , purposeful leadership and innovation as key elements towards realising the mandates of the MNJTF.

Major General Ibrahim expressed readiness to consolidate the exploits and unprecedented successes recorded by the previous distinguished generals who commanded MNJTF with distinction. He observed that, through these successes, the situation in the Lake Chad region has improved tremendously, though there is still some work left to be done. The FC expressed gratitude to the Government and people of Chad for providing safe and conducive working environment for the MSOs at the HQs in N’Djamena.

While decorating the outgoing FC with the MNJTF Medal, the Head of Mission of MNJTF, Ambassador Mamman Nuhu commended General Ogunlade for his outstanding contributions in restoring peace and security in the region. Noting that, though his tenure was short, General Ogunlade has significantly and diligently piloted the MNJTF towards attaining its mandates. He commended his frequent operational field visits to troops’ location, which kept him abreast with the situations in the field. Ambassador Mamman Nuhu also welcomed the new FC, assuring him of his total support and cooperation to discharge his duties. Adding that, General Ibrahim is coming with enormous operational knowledge and field experience being a previous General Officer Commanding 7 Division and Commander Sector 1 in the theatre of operations. This makes him familiar with the terrain and operational environment.

Earlier on, as part of the programme for handing over command, both the outgoing and incoming FCs paid a farewell visit to the Chadian Chief of Defence Staff (CDS), Lieutenant General Abakar Abdelkerim Daoud. The CDS warmly received them and promised to continue to support the work of MNJTF in its strive to rid the region with insurgency.

The highlights of the event were presentation of gifts and souvenirs to some senior officers who completed their tour of duty as well as various presentations to the outgone FC.  The event ended on a hitch free note.

Below are pictures from the ceremony.