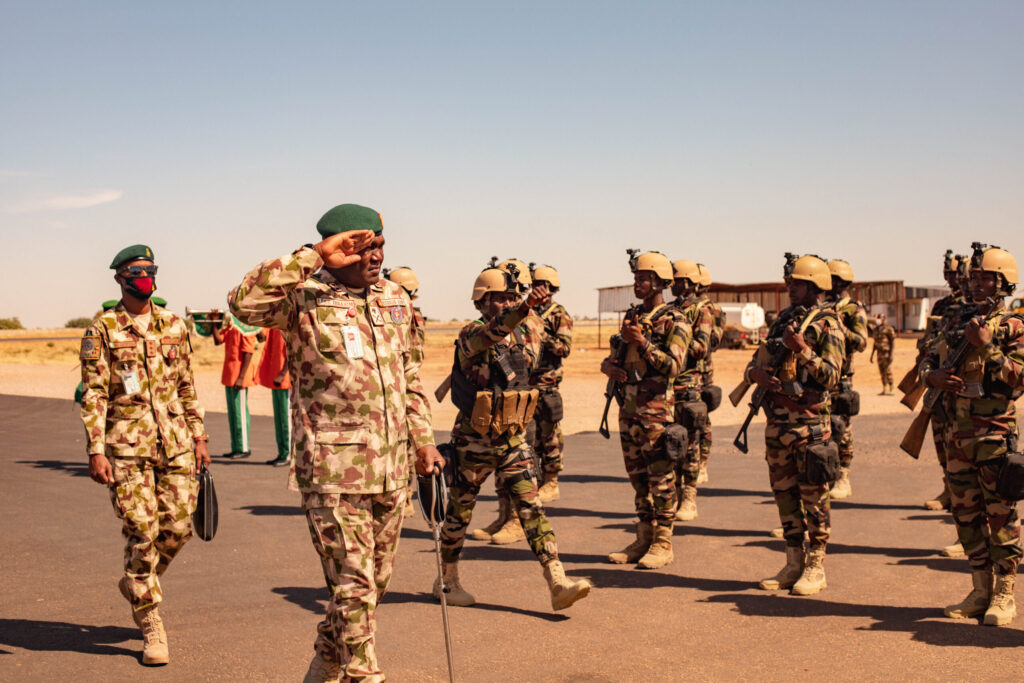 The transformation of Multinational Joint Task Force (MNJTF) into a formidable force commenced in 2014, when Boko Haram Terrorists (BHT) scaled up their nefarious activities leading to the wanton destruction of lives and properties of the communities in the Lake Chad Basin. This necessitated the members nations of the Lake Chad Basin Commission (LCBC) to fall back on the existing security framework of the MNJTF. Accordingly, at its 484th Meeting of Heads of States and Governments held in Addis Ababa on 29 January 2015, the African Union Peace and Security Council (AUPSC) decided to support the efforts of the LCBC Member States and Benin through an authorization of the deployment of the MNJTF. Thus, the MNJTF was remodeled and re-operationalized with an increased capacity of about 10,000 troops and its new Headquarters located in N’Djamena – Chad.

The MNJTF was then mandated among others to “create a safe and secure environment in the areas affected by the activities of Boko Haram and other terrorist groups, in order to significantly reduce violence against civilians and other abuses. The Force started operations on 30th July 2015 with Cameroon, Chad, Niger and Nigeria as Troops Contributing Countries. In a reminiscence of the activities of the Force against the BHT/ISWAP terrorists, the AUPSC at its 1057th virtual meeting held on 14 January 2022 considered the report on MNJTF and decided to renew its mandates for another period of twelve (12) months with effect from 01 February 2022 .

During the meeting, members of the Council, Chairpersons of ECOWAS, and ECCAS, the Head of Mission MNJTF, Ambassador Mamman Nuhu and the Force Commander MNJTF Major General AK Ibrahim extensively deliberated on the progress and challenges of the Force. The Council noted with appreciation and commended the significant recorded progress and display of commitment by the Force in fighting the insurgents. They applauded the dedication and determination of the troops towards degrading the operational capability of the BHT/ISWAP terrorists in the region. The Council equally paid tribute to the soldiers and civilians that have paid the ultimate price and expressed heartfelt condolences to the families and Governments of those that have lost their lives in the course of fight against terror.

While condemning the obnoxious activities of the terrorists against the civilians and troops, which have exacerbated serious humanitarian crisis in the region, the Council reiterated its resolve to mobilise adequate resources and support for the MNJTF to enhance its professional capabilities in combating the menace of the insurgents. In recognition and appreciation of the tremendous support of the European Union (EU) to MNJTF, AU repeated its appeals to members states, other strategic partners and international community to redouble their humanitarian support to the affected communities to enable them safely resettle in their ancestral home.

The AU Commission assured the MNJTF of its necessary support to enable it consolidates on the recorded operational successes against the BHT/ISWAP terrorists and violent extremism in the Lake Chad region. Adding that it will heighten its efforts to supporting the LCBC to deepen the partnership with the ECOWAS and ECCAS, as well as other relevant regional institutions and non-Governmental organisations.