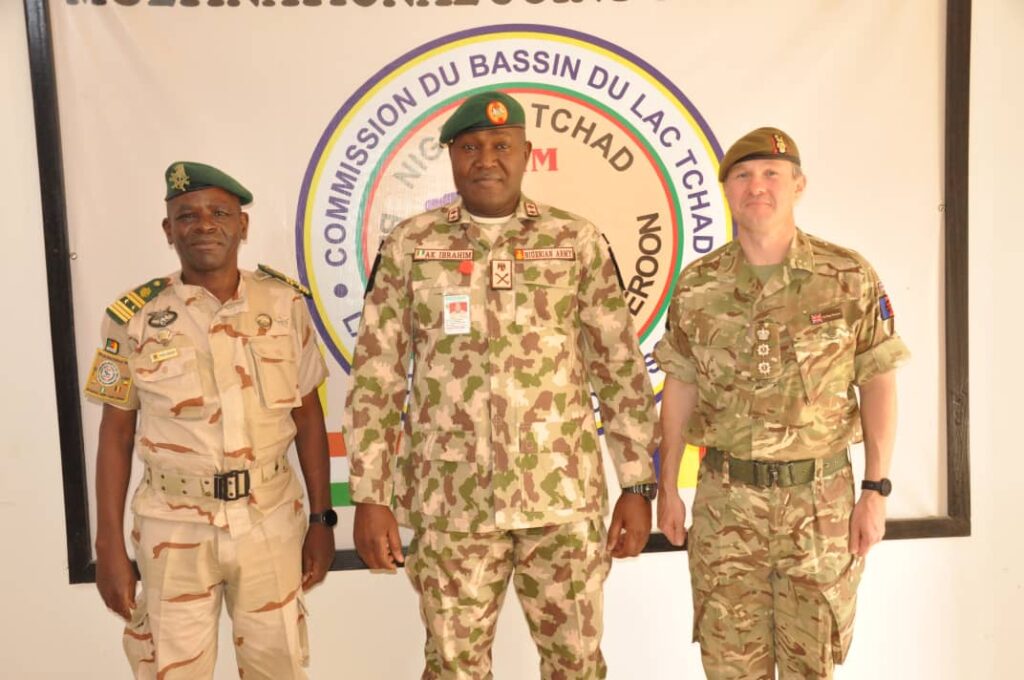 The cooperation and relationship between the United Kingdom (UK) and Multinational Joint Taskforce (MNJTF) has taken a new dimension in counter-insurgency operations. This was reflected during the recent visit by the Commander Operation TURUS, Colonel Rory Shannon to HQ MNJTF on 1 February 2022. The Force Commander (FC) MNJTF Major General Abdul Khalifah Ibrahim welcomed the delegation to N`Djamena and the HQ MNJTF. The FC acknowledged his regular working visits to the HQ MNJTF.

Thus, he proposed a field visit to one of the sectors in his subsequent visits, in a bid to have first-hand information on the progress of the MNJTF activities. General Ibrahim highlighted that the recorded achievements have so far enabled the return to normalcy in most areas previously occupied by the terrorists in the Lake Chad Basin. He said, MNJTF facilitated the restoration of local authorities in towns and villages such as Baga, Banki, Baroua, Amchide being towns in Nigeria, Niger, and Cameroun where Internally Displaced Persons and refugees, who have returned are living in a peaceful environment.

As part of the programme, a detailed information brief was presented reflecting MNJTF activities. While expressing gratitude for the warm reception, the Commander stated that his role is to provide command and control to assigned British troops in West Africa and the Lake Chad Basin region. He equally commended British personnel embedded in Centre Coordination and Liaison (CCL), which is one of the MNJTF strategic partners. As he applauded the operational efforts of the MNJTF, which has taken great strides to counter-terrorism, he recognized that the MNJTF is a unique structure that has a real military bearing in the fight against insurgents in the region. Colonel Rory assured that the UK through the CCL will continue to provide necessary training assistance to enhance the Force operational capabilities, as well as humanitarian support to the affected population.

He acknowledged that the MNJTF operates in a complex environment, faced with daunting operational challenges, as such he promised to present these challenges for possible additional support. The Commander urged for more ways that can strengthen the partnership and collaboration in support of MNJTF activities.

In another related development, the FC received a delegation of the African Union Commission (AUC)Team of Experts in N’Djamena led by Mr. Ahmadu Diongue, Principal Advisor and Coordinator of the Team of Experts at the HQ MNJTF on 2 February 2022. The delegation’s mission in Chad is to help achieve a smooth political transition and facilitate all the procedures relative to the Chadian national dialogue.

The Team Leader started by expressing satisfaction with the achievements of MNJTF in accomplishing its mandates. He highlighted that the MNJTF is part of an important mechanism that facilitates the maintenance of stability and peace as a contribution to global peace and security. He appreciated the cordial and mutual relationship that exists between AUC and MNJTF for the benefit of the population in the Lake Chad Basin. Mr. Ahmadu solicited the support and experience of MNJTF to enable them to achieve their mission in Chad.

In his remarks, the FC assured them of MNJTF support to attain the objectives of their noble assignment, which will greatly enhance peace and stability across the region. General Ibrahim averred that both AU and MNJTF have shared aspirations for the promotion of peace and stability in Chad, taking cognisance of N’Djamena as the host city of the HQ MNJTF. All the visits were hitch-free.