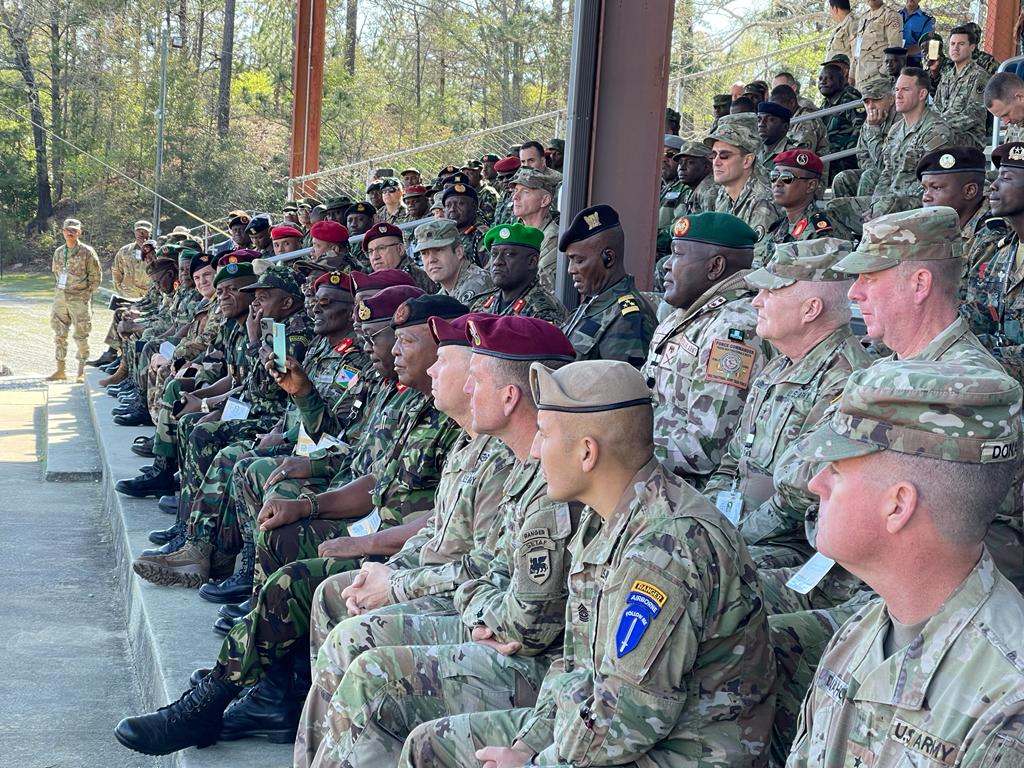 The Force Commander, Multinational Joint Task Force (FC MNJTF) Maj Gen Abdul Khalifah Ibrahim attended the African Land Forces Summit in Columbus Georgia on the invitation of the United States Army from 21 to 25 Mar 22. The Summit had the theme “ Resilient Institutions Build Resilient Leaders”. The summit was attended by delegates from over forty (40) mainly African countries and other organizations like the United Nations and the African Union. Other non-African countries that attended include Brazil, Italy, Spain, and the United Kingdom.

The summit started with opening remarks from Maj Gen Andrew M Rohling, the Commanding General United States Army Southern European Task Force Africa, and Ms. Chidi Blyden, the Deputy Assistant Secretary of Defence for African Affairs. In their opening remarks, the purpose of the summit was stated to bring land force chiefs from across Africa and other partner nations to observe military institutions and discuss how to build leaders that can resolve complex trans-regional threats. The summit was also to enable senior military Leaders from across Africa have the opportunity to solidify relationships, exchange information on current topics of mutual interest, and encourage cooperation in addressing challenges. It was to also allow for discussion on various aspects of Defence leadership including security concerns and partnership building.

The summit included plenary sessions on Overview of the US Army’s approach to training, Training and Doctrine Command, Security Force Assistance Brigade (SFAB) Capabilities brief, and Army Futures Command. There were breakout sessions where the participants were divided into different discussion groups to share ideas on various topics. There were daily visits to Fort Benning ( Manouver Centre of Excellence) where participants were shown the training facility and also shown the US Army’s basic training and Airborne training which included helicopter flights for all participants. Participants were treated to demonstrations and saw the Rangers in action. Additionally , there was live fire from tanks, Bradley fighting vehicles, TOW missiles, and machine guns among other infantry and Armour weapons. Participants visited the National Infantry Museum where the history of the infantry was on display, spanning many centuries.

Participants were hosted to various dinners among which was the Women’s History dinner where the history of the rise of the female gender in the US military was showcased with Brig Gen Aida T Borras, the Deputy Commanding General of the United States Army Southern European Task Force Africa giving a good account of the female gender.

The Chief of Staff of the US Army , Gen McConville also attended the summit where he addressed the participants and enjoined them to cooperate in order to overcome the security challenges . In his closing remarks, Maj Gen Andrew M Rohling thanked the participants for attending the summit of this year (2022) and thanked them for their contributions which made the summit a success.

He hoped that the participants gained more knowledge on how to better improve their various Land Forces and also networked with their various counterparts in the various countries which would make their operations on the continent and the world generally easier. The summit ended on a hitch free note with all participants departing successfully. The next African Land Forces Summit is billed to take place in Ivory Coast in 2023.