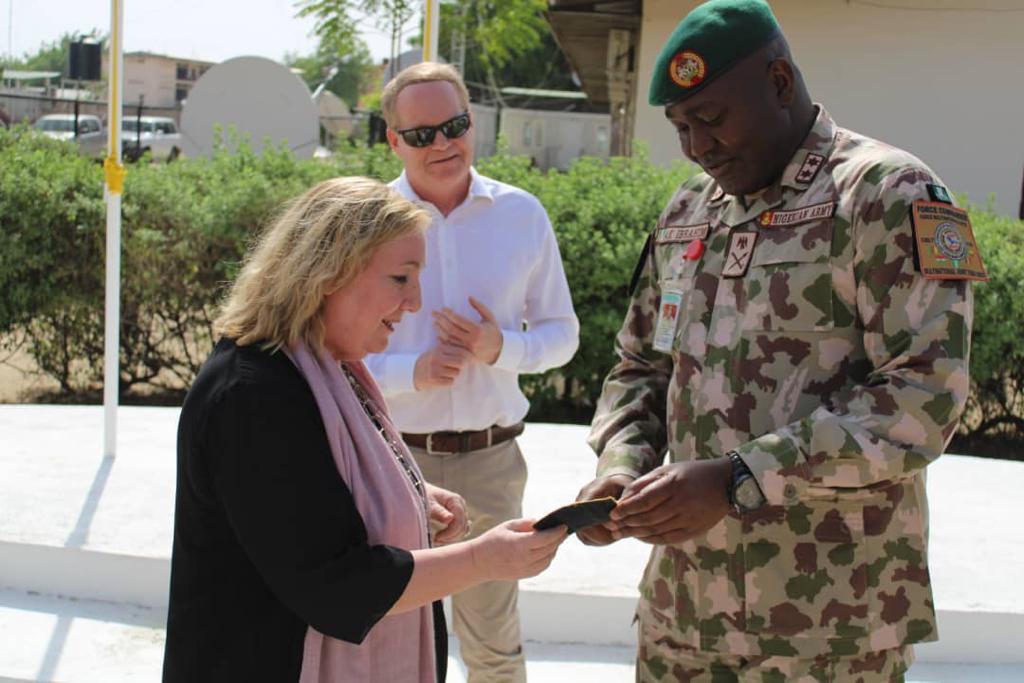 The Multinational Joint Task Force (MNJTF) has had several activities in the last week in the course of its collaboration with critical stakeholders in a bid to actualize its mandate in the Lake Chad Basin Area. These include high-profile visits and media interaction in order to bring the MNJTF and its work to the limelight.

This started on 2 June 2022 with a visit by the United Kingdom’s Special Envoy to the Sahel, Her Excellency Nicola Crossel on 2 June to the Headquarters MNJTF, Ndjamena. She was received by the FC MNJTF, Major General Abdul Khalifah Ibrahim, and was briefed on the activities of the MNJTF including its kinetic and non-kinetic operations aimed at subduing terrorism in the Lake Chad Basin area. In her comments, she appreciated the work of the MNJTF in this important region and assured of the UK’s continued support to the MNJTF to help it achieve its mandate. She was accompanied on the visit by the Acting Comd of the Centre of Coordination and Liason ( CCL) Chad, Lt Col Faye Johnson of the British Army.

Another high-profile visitor to HQ MNJTF was the Special Representative of the European Union to Sahel (SREUS) Her Excellency Madame Emmanuela Del Re who visited on Monday 6 June 22. The envoy who was accompanied by the EU Ambassador to Chad was received by the Force Commander MNJTF.

In her remarks, the Special envoy noted that the cooperation with MNJTF is essential and a concerted effort must be made to partner with the set objectives in the fight against BHTs/ ISWAP. Speaking further, the envoy noticed the commitment and dedication of the troops, she, therefore, urged the troops to sustain the momentum in the ongoing Operation Lake Sanity. She reiterated that the EU will continue to support the MNJTF in its efforts to combat the insurgency in the region. She was earlier briefed extensively on the MNJTF and its activities informing her on the successes and challenges of the Force.

Also, part of the activities of the MNJTF was the efforts to sustain and build on the relationship with the media which the MNJTF recognizes as key stakeholders. In realization of this, the Force Commander MNJTF Major General Abdul Khalifah Ibrahim held a media parley with selected journalists from Nigeria on 1 June 22. In his address, General Ibrahim expressed delight that the journalists accepted his invitation to brief them on the activities of the MNJTF.

He assured them of his utmost cooperation in working together to ensure the positive dissemination of information. He enjoined them to use their considerable reach and get the message to the terrorists to lay down their arms like thousands of their compatriots and surrender. There was a briefing for the journalists on the MNJTF and especially on the ongoing Op Lake Sanity followed by an interactive session where the journalists asked questions and cleared their doubts.

Similarly, the FC MNJTF while on an Operational visit to Sector 1 Mora under the MNJTF, charged the troops to sustain the tempo of the operation. He also held a media parley with the Camerounian Press mainly on the MNJTF and its operations, especially the ongoing Operation Lake Sanity. He praised the commander Sector 1 MNJTF, Brigadier General Debekrio Bouba, and his troops for their tremendous achievements despite the challenges. The FC paid tribute to the troops contributing countries for their efforts to stabilize the Lake Chad region. He praised the Republic of Cameroun for its stabilizing role and said the operation has achieved a lot as normalcy is gradually returning to the Lake Chad Basin areas.

He called for more cooperation and support from the countries of the Lake Chad Basin area.

He urged the provision of more equipment and injection of technology to give the MNJTF a huge advantage over all adversaries. He said the MNJTF would continue its operations even after Operation Lake Sanity.
All the events were hitch-free and well attended.