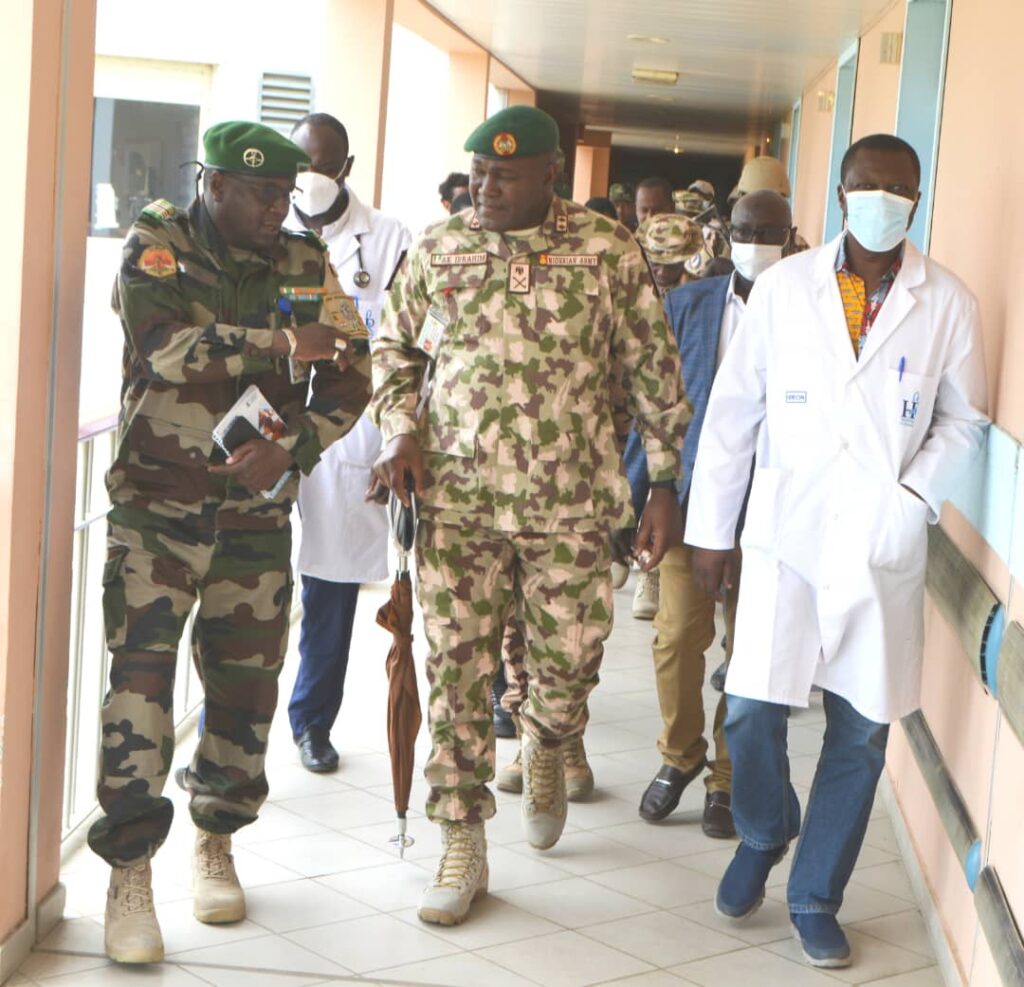 The activities of the Multinational Joint Task Force (MNJTF) in the last few weeks were aimed at improving synergy, efficiency in operations and to uplift the morale of troops towards the total defeat of the Boko Haram/ ISWAP terrorists in the Lake Chad Basin Area. On Wednesday 5 October 2022, the Force Commander ( FC) Major General Abdul Khalifah Ibrahim accompanied by the Deputy Force Commander ( DFC) , Brigadier General Assoualai Blama and other senior officers of the MNJTF visited the Renaissance Hospital in Ndjamena Chad to see and encourage troops of the MNJTF recuperating at the hospital. The FC and entourage were received by the Director of the hospital Dr Abdelsallam Ahmat who took them on a guided tour round the hospital. The FC on his part commended the recuperating soldiers for their bravery and promised continuous care till they are discharged. He equally thanked the hospital for their efficient services and also appreciated the government and people of the Republic of Chad for the security enjoyed which has made the activities of the hospital to be seamless.

In an earlier development, the DFC alongside other Chiefs of cells paid an operational visit to Headquarters Sector 2 MNJTF Bagasola Chad. They were received and briefed on the activities of the Sector by the Commander, Brigadier General Yusuf Mahatma Itno. The DFC in his response appreciated the Sector for their efforts and said the visit was to acquaint himself with the activities of the sector and discuss further on various issues towards improved operational output. He emphasized the need for the sector to maintain operational readinnes through effective training and develop bold strategies towards the restoration of lasting peace in the Sector Area of Responsibility and the wider Lake Chad Basin region. The team also visited the Internally Displaced Persons (IDPs) camp at Bagasola where the IDPs were told that plans were on the way by their respective governments to return them to their ancestral homes. The DFC further appreciated representatives of NGOs such as UNCHR and CRT Chadian for their support to the IDPs.

The Force also conducted a 2 days induction training for newly posted in Military Staff Officers (MSOs) to the MNJTF. The inducted MSOs were from Cameroon, Niger, Chad and Nigeria. The FC while declaring the induction course open welcomed the MSOs and implored them to contribute their best towards the attainment of the MNJTF mandate. Areas covered during the training include customs and traditions of Chad, Continental General Staff Procedure, Media operations as well as roles and responsibilities of the various cells of the MNJTF.

In a related development, the FC urged graduating troops on Nautical units, International Humanitarian Law (IHL) and International Human Right Law(IHRL) to accord great importance to the training received and to ensure the lessons learnt during the training were put to good use towards combatting terrorism in the Lake Chad Region. The FC was represented by the DFC during the closing ceremony of the trainees held at the Douguia – Chad on Friday 30 September 2022. The DFC charged the troops to imbibe the spirit of continuous training as it is critical to the mission. He added that the Headquarters MNJTF not only places importance on capacity building of the troops, but also in the process of planning and executing operations against the Insurgents and other criminals group. The DFC reminded the trainees that the Force had made enormous progress in the area of IHL and IHRL as no form of abuses were recorded during the last Operation Lake Sanity. He therefore remarked that same was expected of the troops. The DFC used the opportunity to visit the Gendarmerie Nationale security post where he discussed extensively about the security of the area with the Commander Gendarmerie Nationale.