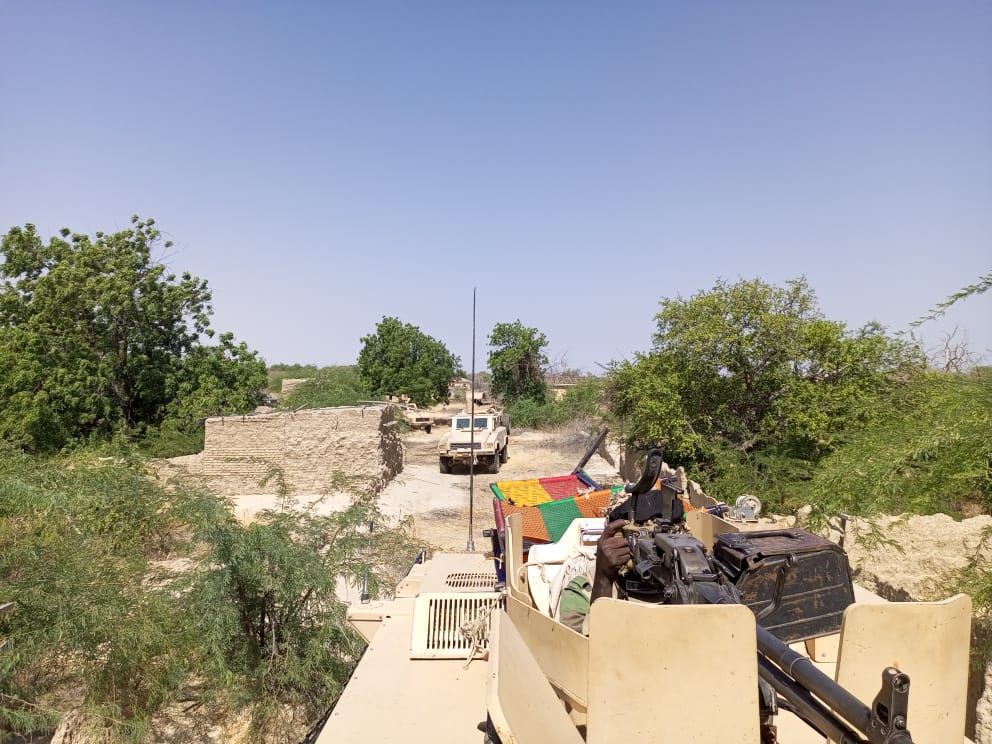 In its continued commitment to swiftly end the menace of the insurgency in the Lake Chad Region, the Multinational Joint Task Force (MNJTF) recently conducted OP SHARAN FAGE with MNJTF troops drawn from Sector 3 Monguno (Nigeria) and Sector 4 Diffa (Niger). The recently concluded operation which was heavily supported by OP HADIN KAI (Nigeria) targeted Boko Haram/ISWAP criminal terrorists hibernating in the vicinity of Mallam Fatori town towards the fringes of the Lake Chad.

In line with its mandate of support for facilitating willing Internally displaced persons and refugees to return voluntarily and safely to their ancestral homes, the MNJTF provided security for the continuous security enhancement work in this area and would do so until the inhabitants return. The operation also created a favourable atmosphere under which the festivities marking the 63rd Anniversary of the proclamation of the Republic of Niger was peacefully conducted on 18 December 2021 in Diffa, with His Excellency, President Mohamed Bazoum in attendance. It should be noted that this was the first such celebration in many years.

Troops met strong resistance from the terrorists, who launched several mortar attacks, laid Improvised Explosive Devices (IEDs) along the troops route of advance and further attacks with Vehicle Borne Improvised Explosive Devices (VBIEDs). However, the troops brought superior fire power to bear on the insurgents forcing them to abandon their enclaves. Operation SHARAN FAGE was massively supported by the air component of Operation Hadin Kai and other partners with air assets and surveillance Equipment. This Support spurred the determined troops to successfully clear enemy hideouts in and around AREGE, GASHIGAR, ASAGA, KAINOA, BANA and KAMAGUNMA among other general areas. In the course of this operation 22 Boko Haram terrorists were neutralised, 5 of their gun trucks destroyed, 5 motorcycles and several logistic bunkers were destroyed while 8 AK47 Rifles were recovered. Regrettably, 6 members of the JTF (2 officers and 4 other ranks) from both countries paid the supreme sacrifice in the line of duty with about 16 wounded in action. 17 suspects were arrested in the general area of operations and are being profiled.

On Wednesday, 29 Dec 21, the Force Commander, MNJTF, Maj Gen Abdul Khalifah Ibrahim on a debriefing mission visited the MNJTF Headquarters in Diffa Niger Republic where he addressed the officers and men after receiving an after action brief by the Operational Commanders. He commended the uncommon display of gallantry professionalism and courage by the troops who have taken the fight to the criminals hideouts in their areas. He said after listening to the brief, that a lot still needs to be done but this was a good starting point. He promised to mobilise more equipment and other operational enablers to the Sectors. He declared year 2022 as a year of decision for the MNJTF as he vowed to uproot the criminals from their hideouts in the lake. He paid tribute to the fallen heroes whom he described as martyrs of freedom. He appealed to the people of the Lake Chad Basin to continue to support the MNJTF and to bring forward information. He further assured them of the MNJTF resolve to clear the operational area and make it safe for all in the coming year in compliance with directives of the Service Chiefs of the Lake Chad Basin Countries. He was accompanied on the visit by the Deputy Force Commander MNJTF, Gen Abdou Assoumane (Niger) and other key commanders of the MNJTF.

Relatedly, in the side line of this visit the FC alongside other MNJTF senior officers decorated some rotating staff of the MNJTF Sector 4 with the MNJTF medal of service. He thanked them for their meritorious service. The visit was rounded with a virtual conference with Ambassador Bankole Adeoye, Commissioner for Political Affairs of the African Union Security Council in Addis Ababa who thanked the FC and DFC for their untiring efforts and asked that his best wishes and End of Year/New Year greetings be passed to all members of the MNJTF in all the countries. He charged the MNJTF to do all it can within its powers to end the crisis in the Lake Chad Basin area soonest. He assured of the continuous support of the AU Headquarters in achieving this. Visit was hitchfree and the FC has safely returned to his Headquarters in N’Djamena Chad.