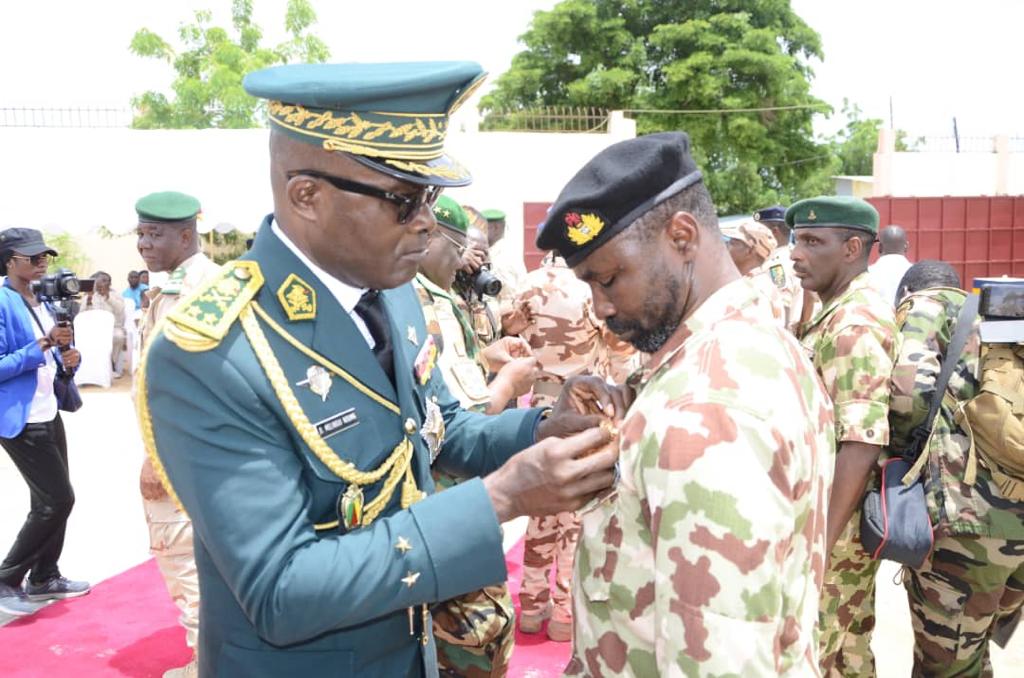 The ceremony which is celebrated annually is to honour MNJTF personnel who have completed their one-year tour of duty.

In his remarks, the Force Commander MNJTF Maj Gen Abdul Khalifah Ibrahim said the 2022 medal parade is unique in several ways especially the commemoration of the seven years of the operationalization and reorganization of the MNJTF in July 2015 in the historic city of N’djamena Chad with specific mandate to combat terrorism and insurgency in the Lake Chad Region.

Speaking further he said MNJTF has carried out several successful major operations since its inception involving other troops contributing countries. He noted that in the last one year over two hundred thousand (200,000) Internal Displaced Persons (IDPs)/ Refugees have returned to their ancestral across the entire region which includes those who fled and have returned to their hometown of Baroua, N’gagam, N’garwa Kaura in Diffa-Niger Republic. Cross Kauwa, Baga and Doron  Baga in Borno state – Nigeria, Kolofata, Makari and Fotokol in Cameroon and Madai, Kangalia in Chad amongst many others. Over six thousand (6,000) ) personnel from all the Troops Contributing Countries including the Republic of Benin were awarded two (2) categories of medal.

Another important segment of the occasion was the awards of gallantry medal to deserving personnel of MNJTF who participated and distinguished themselves by acts of bravery in the recent  Operation Lake Sanity.  A total of 12 officers and men drawn from the 4 sectors of the MNJTF were recognized.  They were decorated by the Special Guest and other dignitaries. The maiden edition of the MNJTF Magazine known as “The Mandate Magazine” was launched.  A special appreciation medal was presented to Special  Guest of Honour,  Prof Babagana Umara Zulum, the CDS of TCCs. Head of Mission, Ambassador Mamman Nuhu among others.

The representative of  Head of Mission   in his remarks thanked the MNJTF for their efforts and commitment towards the restoration of peace in the region and assured them of the support of the TCC.

The Special Guest in his speech appreciated the untiring efforts of the MNJTF at addressing the scourge of terrorism in the Lake Chad Basin areas. He applauded the recently concluded operations Lake Sanity which he said was a combined operations by Chad, Cameroon, Niger, and Nigeria which made a significant inroad to the Tumbuns. He called on the MNJTF to support the recent surrenders in the troubled areas as military solution alone cannot end the Crisis in the region.

He congratulated the personnel, especially those who got the gallantry medal award of operations Lake Sanity, and wished them well. Sector Commanders were also appreciated and decorated with their medals. The Deputy Force Commander Brigadier General Abdou Assoumane in his vote of thanks thanked all the dignitaries who attended the Parade and called for more cooperation and cohesion by countries of the Lake Chad Basin areas to finally bring this conflict to a close.