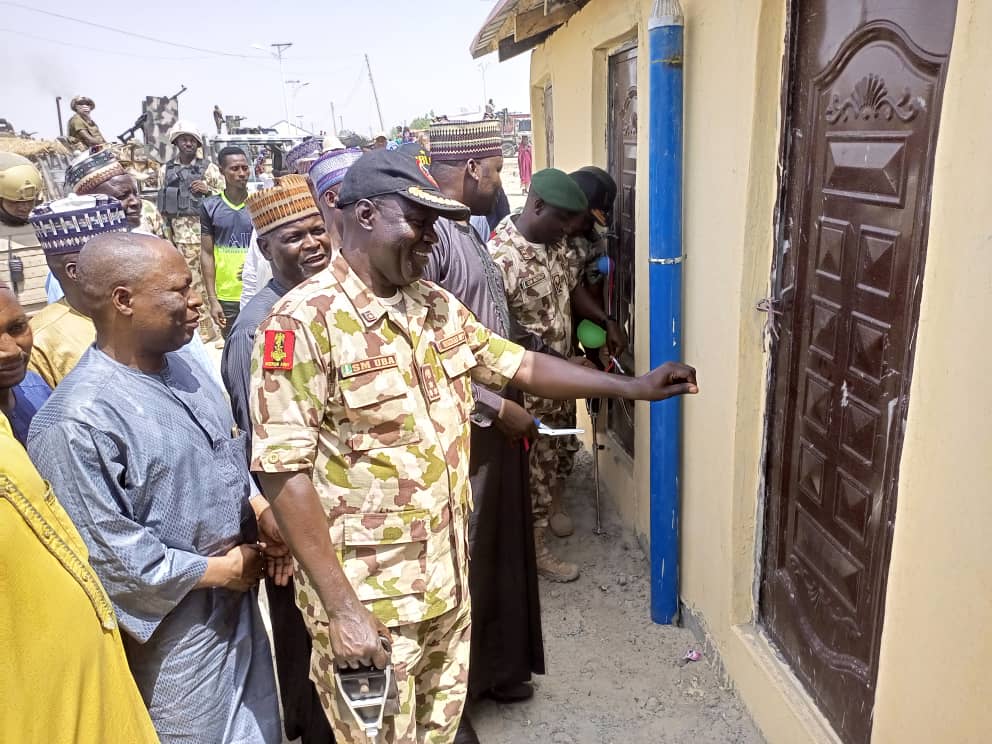 In line with the MNJTF Force Commander, Major General AK Ibrahim’s drive towards alleviating the sufferings of the returnee IDPs / Refugees to their ancestral homes, he has accordingly embarked on the conduct of a series of aggressive Humanitarian projects both within and outside N’djamena.  Similarly, his Sector Commanders have equally keyed into this drive by embarking on the execution of Quick Impact Projects (QIPs) aimed at winning the hearts and minds of the people affected by terrorism within their various Areas of Responsibility.

In line with this drive, Brigadier General SM Uba, the Commander 401 Special Forces Brigade under Sector 3, magnanimously built a block of 6 toilets and 2 bathrooms at Cross Kauwa market square for the benefit of the people of Cross Kauwa.  The construction of the public toilets became necessary after the resettlement of the inhabitants of Cross Kauwa into their ancestral home and the subsequent resumption of market activities. The resettlement is coming many years after the inhabitants flee the community due to terrorist activities. Since its reopening, Cross Kauwa Market has continually witnessed a leap in commercial activities as traders from far and near attend the market to trade in livestock and other commodities. This influx of traders has accordingly led to a rise in open defecation which became a menace and a threat to public health in Cross Kauwa and that of military personnel living in the same environment.

Consequently, to avert the outbreak of infectious diseases like Cholera which is associated with open defecation, Brig Gen Uba therefore, felt the need to provide a sustainable solution.  This, however, led to the construction of a set of 3 toilets for males and 3 toilets for females with a bathroom each for both genders to be used by the locals and those who usually come for the weekly market activities. The project will also serve as a Civil-Military Cooperation project which will help in winning the hearts and minds of the locals toward supporting the conduct of operations by both the Nigerian Army and the Multinational Joint Task Force. Furthermore, the project was commissioned by the Commander Sector 3, Major General GM Mutkut on 20 June 2022