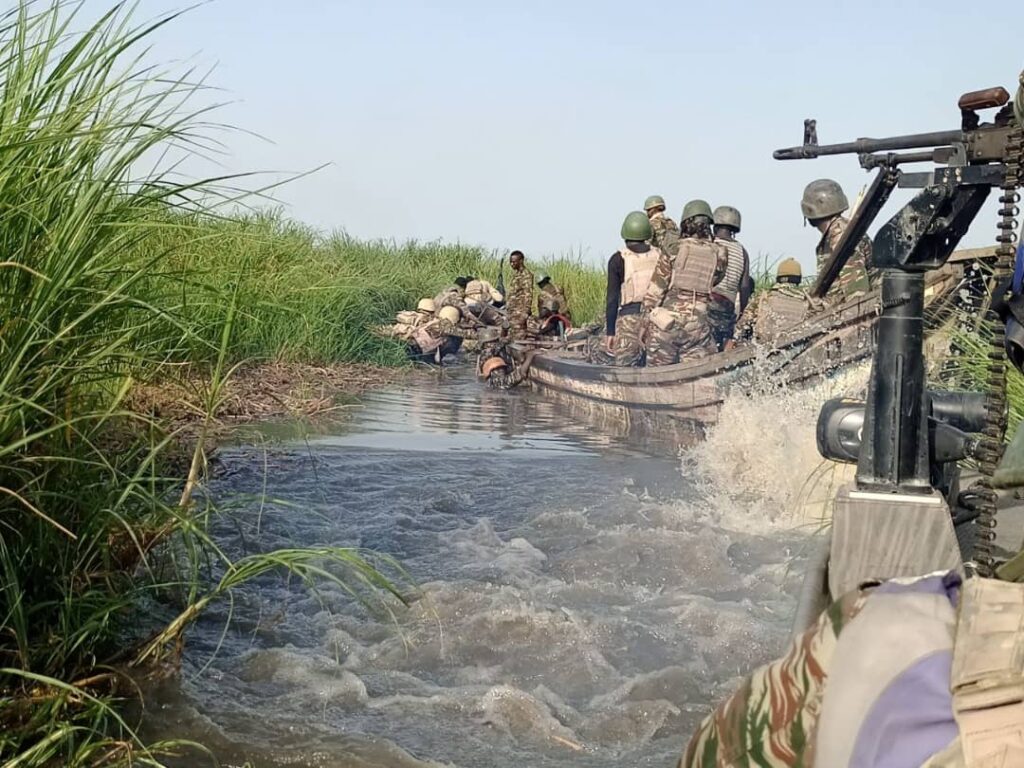 The troops of combined Taskforce Mallam Fatori/Damasak at Forward Operations Base Arege drawn from MNJTF Sectors 3 and 4 (Nigerian and Nigeriene troops) have continued with aggressive patrols from 27 April 2022 to dominate and put pressure on the criminals. With multiple sorties against the terrorists’ positions, Air Taskforce gave effective close air support and attacked the criminals to enable ground forces to access thitherto well-defended terrorists’ strongholds in the vicinity of Tumbun Rago. Despite strong resistance by the Boko Haram Terrorists (BHTs), the ground troops charged through several obstacles and cleared the mined routes which made them to come in contact with elements of the BHTs.

After the operational engagement which was firmly supported by the ATFs of OPHK and the MNJTF, a battle damage assessment clearly revealed at least 20 BHT were neutralised, twelve (12) AK 47 rifles, 1X Mortar 60mm, and large catches of ammunitions of different calibers were recovered. Likewise, carefully concealed 5x Gun Trucks and a truck laden with supplies meant for the criminals were destroyed.

Also, an MRAP fighting vehicle was recovered by the troops, it was carted from the NA position in the past.

Relatedly, troops of sector 1 Taskforce Wulgo (MNJTF troops from Cameroun) continued aggressive dominance of their assigned areas with a clearance patrol to the general area of Chikingudu, areas were seen to be deserted but troops came in contact with 2 Boko Haram logisticians who attempted to flee but were neutralized by the vigilant troops, 2 motorcycles were recovered from them. Meanwhile, the Amphibious Taskforce Darak  of same Sector 1 have continued their maritime patrols to dominate their areas. taskforce cleared the villages of  Bourame and  Magoume , however nothing of security significance was found with the villagers carrying out their normal routines. The TF continued to the Kirta Wulgo and Tcholl settlements suspected to have Boko Haram terrorists hibernating there but the terrorists fled before arrival of own troops.

Make shift shelters seen there were destroyed by the gallant troops. The combined ground and amphibious operations have exacted much pressure on the terrorists denying them freedom of movement and action and this would be sustained by the highly spirited troops.