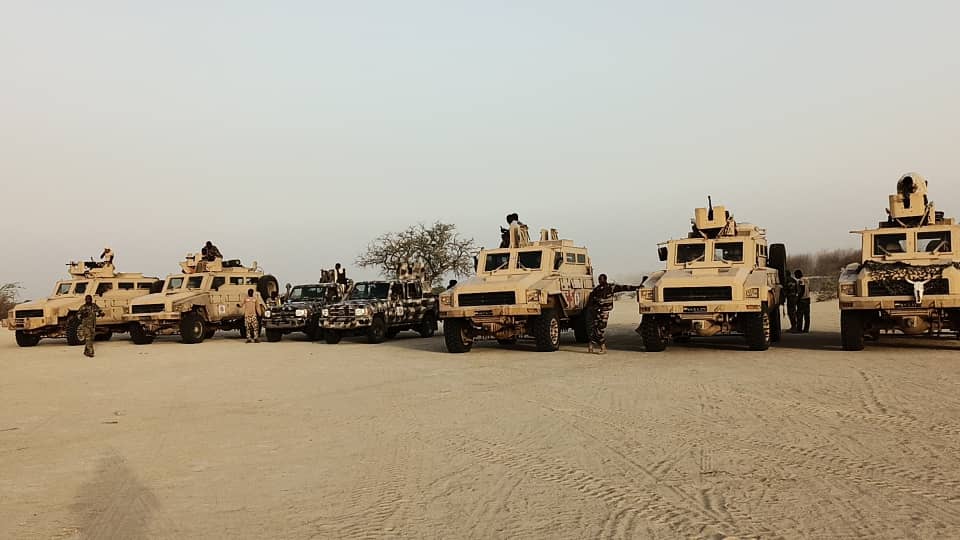 In continuation of its counter-insurgency operations in the Lake Chad Basin (LCB ) areas, the forces of the Multinational Joint Task Force have continued their determined thrust into the Lake Chad Islands (Tunbums ) in a bid to clear the areas of the criminal Boko Haram /ISWAP terrorists. From 17 May 22, troops of Task Force Mallam Fatori comprising Nigerien and Nigerian troops from the MNJTF firm Base in Arege carried out clearance operations to the general areas of Ali Jimari, Dogon Chuku, and Tunbum Rago. Troops sighted some motorcycles and an old Hilux Toyota van suspected to be Boko Haram/ ISWAP criminals, a hot pursuit led them to the location where the criminals ran away and abandoned the items. The 2 motorcycles and the old Hilux Toyota van were burnt in the location.

Similarly, in a separate incident, a young Fulani girl named Salamatu, aged about 12 was found by this Task Force team wandering in the bush, she claimed to be from Darge Kessa Village in Abadam LGA. After necessary profiling, she will be handed over to the relevant authority for further action.

In a related development, troops of Task Force Kangarwa, comprising Nigerian and Tchadian Troops of Op Hadin Kai/MNJTF commenced aggressive clearance operations from Monguno on 17 May 22 and have so far cleared the settlements of Grada, Kwatan Maishayi, Daban Karfe, Daban Gajere, Tumbun Buhari, Tunbun Abuja, Sabon Tunbu, Ali Sherifti, Doron Naira, and Daban Masara among others. No contact was made with the criminals who ran away from these enclaves in a bid to avoid being sent to account to God for their heinous crimes. Items found include packed fish in cartons, fish being prepared, assorted grains, household items, and a lone motorcycle. In line with MNJTF SOP for operations, the enemy camps were destroyed and items were properly burnt. About 30 young men who claimed to be fishermen and farmers were arrested in the general area of Doron Naira and are being profiled and interrogated to ascertain their culpability or otherwise.

The FC MNJTF has sent his words of encouragement to this Task Force through the Commander Sector 3 MNJTF, Major General GM Mutkut who is personally leading this operation, and urged them to remain focused and alert. He reminded them of their obligation to respect the laws of armed conflict but that should not detract them from being lethal and ruthless toward the enemy. He equally appreciates the untiring efforts of the MNJTF/ OP Hadin Kai Air Components for their efforts. The operations are ongoing.