MNJTF COMMANDER URGES TROOPS TO SUSTAIN THE MOMENTUM OF OPERATION LAKE SANITY…..As he visits troops on the frontlines in the Lake Chad 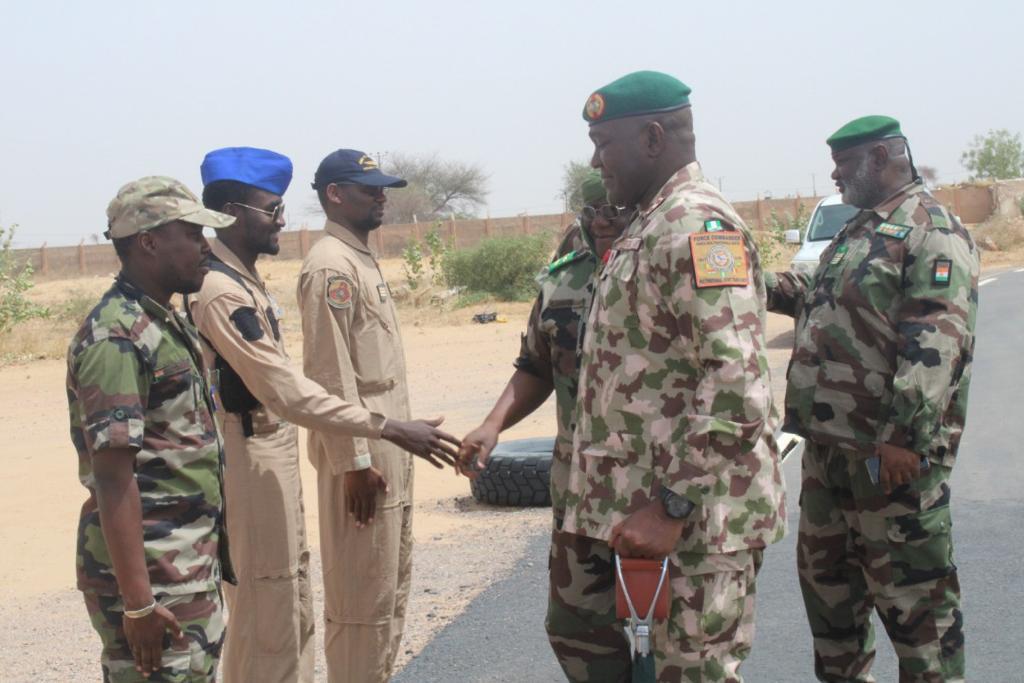 The MNJTF troops of Sector 4 (Niger Republic ) continue to dominate their area of operation with aggressive clearance operations toward identified terrorists’ hideouts. In a recent encounter at the general area of Kaji Jiwa, they came in contact with some elements of Boko Haram Terrorists (BHT) after the fierce firefight, about thirty (30) terrorists were neutralized and recovered after the encounter was, a total of 15 AK 47 rifles, 2 belts of 222 ammunitions and 179 cartridges, 2 cell phones and 1 BHT banner flag. Additionally, the troops successfully apprehended eleven (11) suspects comprising three (3) minors who are currently undergoing interrogation. In another separate encounter, some elements of the BHT/ISWAP attempted to infiltrate a defended location of sector 4 (Niger Republic ) near Doutchi, but were swiftly repelled by a well-coordinated action between the Air Taskforce and ground troops.

At the end of the encounter, 3-gun trucks were destroyed and one gun truck was recovered, with several insurgents neutralized. Sadly, a soldier paid the supreme sacrifice and six others wounded are currently receiving treatment at a military facility. It is very obvious, that the ongoing offensive actions have significantly curtailed the terrorists’ freedom of movement and actions.

The troops of Taskforce Arege made of Nigerian and Nigerien troops have continued with clearance operations to effectively dominate the general area of Fedondiya and Arege vicinity. Pushing further ahead, there was no contact or resistance, as the elements of BHT continued to abandon their enclaves and makeshifts hamlets and flee. Nevertheless, wherever the troops came across such make-shift shelters concealed under trees suspected to be enemy outposts, the makeshift houses were thoroughly ransacked and immediately set ablaze before troops continued with their advance.

Likewise, Sector 1 (Cameroon) Amphibious Taskforce has stepped up riverine patrols and assaults against the BHT elements in the general area of Tchol and Chaka. In the course of these operations on sighting the advancing patrol teams, some suspected terrorist logisticians fled and abandoned some canoes fully loaded with bags of foodstuff (grains) and other materials being ferried to the criminals. All the items were confiscated and destroyed while the troops continued with the patrols on the waterways to block the possible escape and supply routes used by the terrorists.

Meanwhile, the Force Commander (FC) Multinational Joint Taskforce has extolled the troop’s professionalism and uncommon display of courage and bravery. He made the commendation when he visited the troops at the MNJTF Forward Operations Base in Arege near Lake Chad He said that their dominance of Arege was encouraging but urged them to conduct aggressive mobile operations to pin down the enemy in the Lake Chad islands. He was taken round the location and shown the site of a failed vehicle suicide bombing attempt. Addressing the troops, he urged them to remain alert and focused on the task ahead at all times. He also addressed personnel of the Air Taskforce at their base in Diffa. He commended their professionalism and sense of duty and urged them to progressively sustain the momentum of the operation in order to completely annihilate the evil-minded criminals in the region. The FC was accompanied by the Deputy Force Commander, Brigadier General Abdou Harouna Assoumane, Commander Sector 3 (Nigeria), Major General GM Mutkut, Commander sector 4 (Niger), Colonel Major Mamane Sani Kiaou, and some Chiefs of Cells from Tactical Headquarters, Diffa in Niger republic.

On the sideline of the operational visit to Tactical HQ in Diffa, the FC made a courtesy call on the Governor of Diffa region, His Excellency Issa Lamine. General Ibrahim intimated the Governor on some issues and solicited the continued support and cooperation of the people of Diffa region and beyond for the success of the MNJTF. He expressed satisfaction with the level of participation of the troops from sector 4 Diffa who have been very professional in the field. The FC equally commended the well-coordinated synergy of efforts between the Air Taskforce and ground forces. He assured the Governor that the MNJTF troops will continue to work hard as a team with the ultimate aim of defeating the terrorists in the region.

The Governor who was visibly elated with the visit commended the FC and his team for the guidance and directions given to the troops, which is being translated to victory on the battle field. He pointed out that some bad elements in society are collaborating with the BHT, which is causing adverse effects on the smooth conduct of the operation. Speaking further, Mr. Issa Lamine promised to mobilise adequate support from the population so as to mitigate these illegal activities of the collaborators and sponsors. Adding that in his interaction with the civil populace, they can sense that normalcy is being restored every day and wished the MNJTF great success in its mission of stabilizing the Lake Chad Region. The operational visit of the FC to the MNJTF Tactical HQ in Diffa and visit to the troops was adjudged successful.