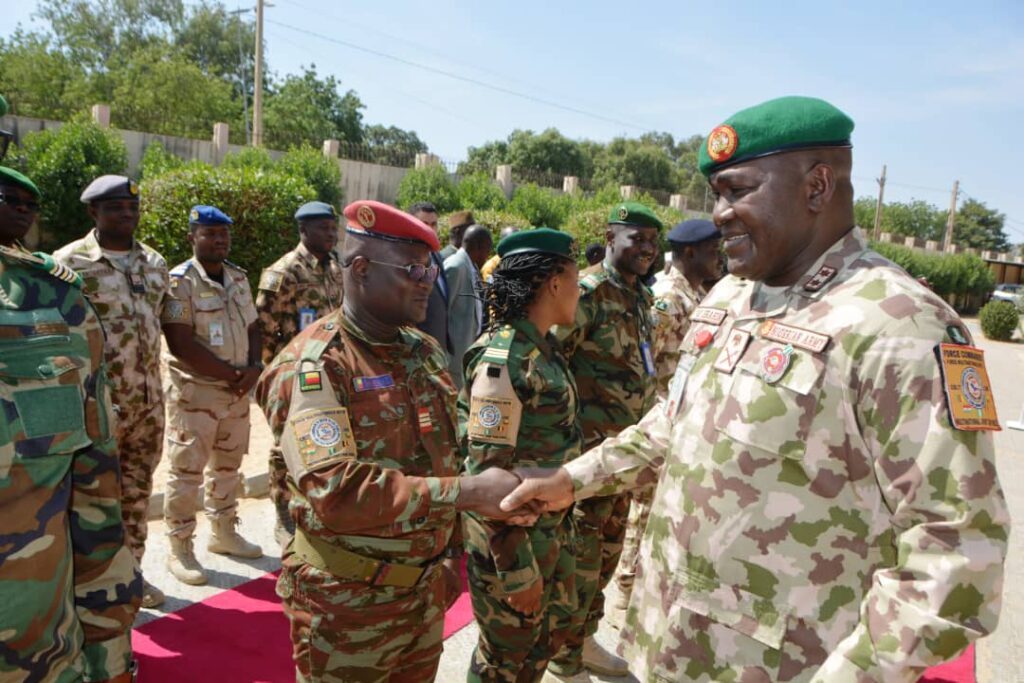 In a bid to further consolidate the gains of the Multinational Joint Task Force (MNJTF) in the fight against terrorism, Military Staff Officers of HQ MNJTF, the African Union Mission Support Team, Military Officers of Centre for Co-ordination and Liaison, staff of Radio Ndarason International and other civil components of MNJTF have pledged their commitment towards bringing an end to the activities of terrorists in the Lake Chad Basin region. This statement was made on Friday 13 January 2023 during a brief ceremony to usher in activities for the year 2023 at the HQ MNJTF Camp Farcha, N’Djamena Chad. Okay

In his remarks, the Force Commander (FC) Multinational Joint Task Force (MNJTF) Maj Gen Abdul Khalifah Ibrahim commended the staff for working harmoniously to fight terrorism and insurgency in the Lake Chad Basin region. He said the efforts to put an end to the activities of Boko Haram and the Islamic State of West African Province (BH/ISWAP) must be sustained. According to the FC, the successes recorded in the year 2022 was as a result of cooperation at all levels driven by the need to collectively fight insecurity in the region. He stated that he was optimistic that the unwavering synergy between the military and strategic partners will defeat the menace of the terrorists in the region finally this year. The FC also appreciated the Republic of Chad for providing a conducive and safe environment for HQ MNJTF to carry out its activities. He then paid tribute to the fallen colleagues who paid the supreme price in the quest for peace in the region and prayed for peace and stability in the Lake Chad basin countries, he ended by wishing everyone a happy new year 2023.

Speaking earlier, the Deputy Force Commander (DFC) Brig Gen Assoualai Blama thanked the FC for his leadership style which is reflected in the numerous successes recorded by MNJTF during the past year. He also informed the FC that the Staff and other components were ready to accomplish the mandate of the MNJTF which would ensure the total return of peace and security in the Lake Chad Basin region. In the words of the Deputy Force Commander” the MNJTF is the product of the strong will of the Heads of State and Governments of the member countries of the Lake Chad Basin Countries who faced with the common threat of the Boko Haram terrorists nebula, decided to provide a common response through the operationalization of a unique joint force “ He said as a team, the MNJTF will continue to work assiduously in tackling the activities of the BH/ISWAP until the fight against terrorism was brought to a favourable end. He also thanked various partners for their tremendous support to the MNJTF and called for more. He listed some achievements of the force to include successful operations such as Operation Lake Sanity and the return of thousands of refugees and internally displaced persons back to their ancestral homes and promised to do more this new year.

Highlights of the occasion included FC’s personal interaction with everyone present, group photographs, and expression of goodwill. Event was hitch-free.