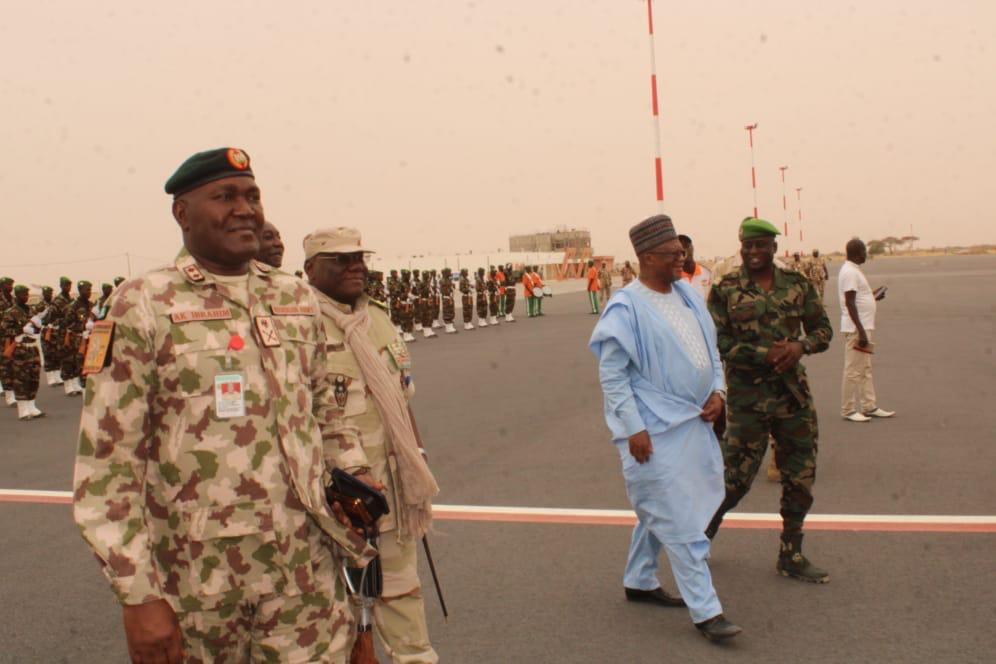 The Head of Mission of the Multinational Joint Task Force(MNJTF) who is also the Executive Secretary of the Lake Chad Basin Commission, Ambassador Mamman Nuhu has commended troops of the MNJTF for their efforts in the ongoing Operation LAKE SANITY, urging them to sustain the pressure on Boko Haram(BH) and Islamic State of West Africa Province (ISWAP) terrorists to bring the insurgency to an end. He gave the commendation while on an assessment visit to the Tactical Headquarters MNJTF in Diffa Niger Republic on Friday 13, May 2022. He further stated that he was in Diffa to among others convey the appreciation of the Heads of States of MNJTF Troop Contributing Countries and the entire Lake Chad Basin Region to the troops for the success so far achieved in the operation. He was received on arrival at the Diffa Airport by the Governor of Diffa Region of Niger, His Excellency Issa Lamine, and the Force Commander MNJTF, Major General Abdul Khalifah Ibrahim, Deputy Force Commander Brigadier General Abdou Harouna Assumane and other senior officers of the MNJTF.

Ambassador Mamman in his comments after being briefed,noted that the nature of insecurity in the Lake Chad region calls for deliberate and sustained effort as well as the cooperation of all participating countries to surmounting the security challenges. He said he is happy that the MNJTF has been reinvigorated as they are taking the fight to the enemy in the tunbuns ( Lake Chad Islands ) which is the stronghold of the terrorists.

While delivering his remarks , the FC welcomed the HoM and told him that the MNJTF is ever ready to carry out its mission to a logical conclusion. He called for more support from the various troops contributing countries and for more cooperation to enable them attain mission objectives. He requested for more equipment such as MRAPs for the various contingents of the Force. The HoM laid a wreath at the tomb of the unknown soldier in Diffa in recognition of the soldiers who paid the supreme sacrifice in the search for peace under the MNJTF Flag. He addressed troops of the MNJTF and interacted with the Press where he called on the insurgents to lay down their arms immeadiately.

In another development, The FC MNJTF accompanied by the Deputy Force Commander, Brigadier General Abdou Harouna Assumane on Tuesday 10 May 22 visited Mallam Fatori , base of the 68 Battalion where he was briefed and he also interacted with the officers and men of the Forward Operations Base. Similarly, the FC was in Mallam Fatori to inspect and interact with the Chadian Contingent for Op Lake Sanity who are newly joining the mission. He urged them to be courageous, lethal and professional in the conduct of the operations and wished them well. Thereafter, an operational meeting was conducted by the FC with all the officers in the Base. The obviously elated troops promised to make the MNJTF proud in the operations.

On Thursday 11 May 22, the FC held a meeting with all the Commanders of the MNJTF drawn from all the Sectors. The meeting was aimed at appraising the operations so far and to enhance preparations for the next decisive stage. The FC praised the courage, commitment and doggedness of the troops so far and the various commanders for their leadership but quickly reminded the meeting that the task was not over yet as the criminal Boko Haram/ ISWAP terrorists still remain active.

Reviewing the Operations so far, the FC stated that over 30 encounters have been recoded so far with the criminals running away or neutralized in most of them and their equipment destroyed or captured. An increasing dependence on improvised explosive devices (IED)by the desperate criminals was noted and necessary counter measures were proffered. About 4 IED making factories were destroyed in the course of the operations so far. He praised the decisive role of the Air component of the MNJTF/ OP Hadin Kai for the remarkable role played in taking out several enemy camps, equipment and commanders latest among whom is Abu Ibrahim who was an ISWAP leader( Khalifa) in the Lake Chad Tunbumas and was a leader before in the Timbuktu Gen areas.

He was also very happy with the synergy and cooperation with Op Hadin Kai . He said over 52,000 terrorists comprising fighters, those conscripted by force, and their families have surrendered in the MNJTF and Op Hadin Kai areas of operational responsibility and urged those still in the bushes to lay down their arms and surrender.

Over 300 terrorists were neutralized either in direct combat with the MNJTF troops or as a result of combined air strikes across the lake Chad Basin. He said the entry of the Chadian contingent provides additional firepower in terms of armoured personnel Carriers ,MRAPS and other combat enablers and urged that the criminal Boko Haram Terrorists/ ISWAP be hunted and wiped out wherever they are. He also praised the maritime efforts so far and said he looks forward to more successes in the next few days and weeks.

Regrettably, the Operation recorded about 7 casualties comprising 6 soldiers and a member of the Civilian Joint Task Force supporting the operations. Several troops have also been injured but are recuperating well. He prayed for the repose of the heroes who paid the supreme sacrifice and quick recovery for the injured. He once again called on the terrorists be they Boko Haram faction or ISWAP to abandon the criminal organization and surrender like thousands of their compatriots have done before it is too late.

The FC commended the officers and men of the MNJTF for their commitment and gallantry and said history would remember their role in ending the scourge of terrorism in the Lake Chad Basin.
The events were hitch free and the HoM and all commanders have returned to their respective locations while the gallant troops continue with the operation.