HAND OVER OF AFRICAN UNION DONATED EQUIPMENT  TO VARIOUS SECTORS  OF THE MULTINATIONAL JOINT TASK FORCE. 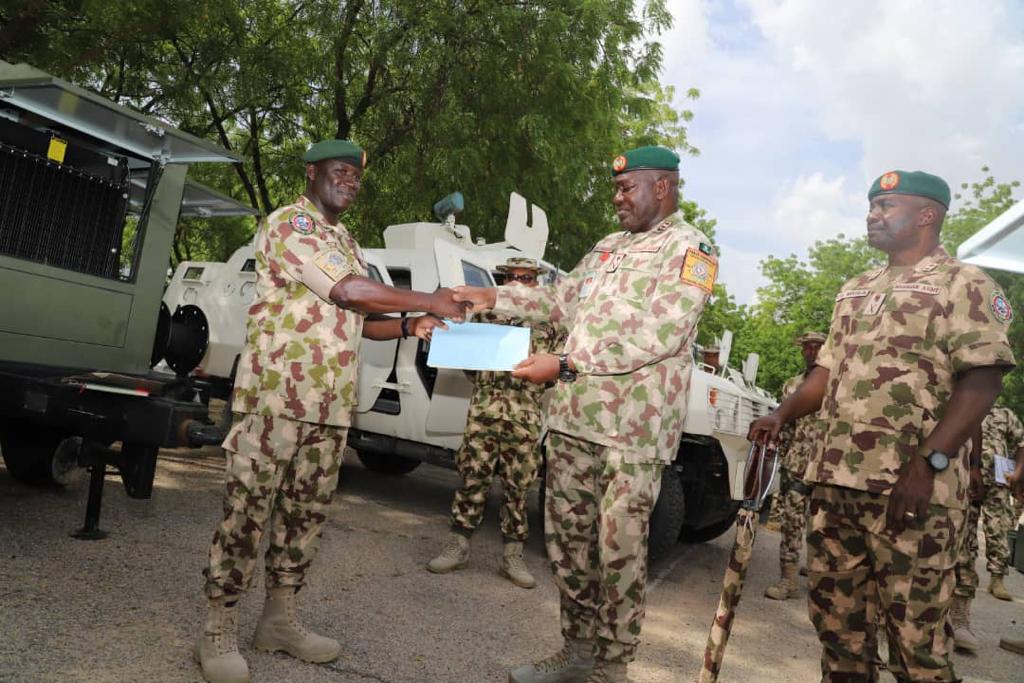 Sequel to the visit of the Force Commander Multinational Joint Task (MNJTF) Force Commander (FC) Maj Gen Abdul Khalifah Ibrahim to the African Union (AU) Continental Logistics Base Doula, Cameroon in November 2021 where the FC  and his team inspected and identified various equipment that would be useful in its Counter Insurgency operations. The equipment include Armored personnel carriers (APC)  Troops Carrying Vehicles,  Buses, high caliber generators, Counter Improvised Explosive Devices (IED) equipment, and office equipment among others. Consequently, approval to issue was sought from the AU through the Lake Chad Basin Commission (LCBC). Thereafter the necessary paperwork and authorization by the AU, the host country Cameroun, escorted the equipment to the recipients Troops Contributing Countries ( TCCs) of Nigeria, Niger, Cameroon, and Chad respectively.

On 13 July 22 in Maimalari Military Cantonment, Maiduguri’ Borno State, the FC in company of the Theatre Commander (TC), Operation Hadin Kai, Maj Gen CG Musa, formally handed over the equipment to Sector 3 of the MNJTF. The items were received after a brief ceremony by the Commander Sector  3 with headquarters in Monguno Nigeria, Maj Gen GM Mutkut.

In his remarks, the FC said the equipment were given to the sector to improve their combat efficiency and to enable them take the fight to the enemy. He praised the doggedness of the Sector in the course of Operation Lake Sanity and urge them to do more. The TC, Maj Gen Musa in his remarks, thanked the AU for the donations and said with such donations the North East (NE) operational environment will soon be secured and this would allow forces to concentrate on other security challenged areas in the country. He charged the Sector to be offensive-minded always. The  Commander Sector 3 thanked the AU and LCBC through the FC and stated that the equipment would be well maintained and deployed effectively against the Insurgents stating that to whom much is given, much is expected from him.

In related development, on Saturday 16 July 22 at  MNJTF Sector  1 Headquarters Mora Republic of Cameroon, the FC  accompanied by staff officers and Head of Cells from HQ MNJTF formally handed over the equipment meant for the Sector. The equipment include Armour Personnel  Carriers, Counter Improvised Explosive Device equipment, 2 high caliber generators, vehicles, and office equipment. In attendance were outgoing Sector 1 Commander Brig Gen Bouba Dokebreo and other senior officers of the Sector headquarters. The Sector  Commander in his remarks thanked the AU and the LCBC for facilitating the delivery of the equipment. Brig Gen Bouba further appreciated the FC for always supporting the Sector in the course of its operations.

The FC in his remarks stated that he is happy and proud of the work of Sector 1 MNJTF and with the new equipment, the sector would maintain and surpass its high standards. He added that he is sad that the Sector Commander is leaving the MNJTF for another assignment. However, he praised and thanked him for his stellar services rendered to the MNJTF and most especially to his country the Republic of Cameroon. He described the Sector Commander as a professional officer that would be sorely missed.

In another development, the equipment meant for the Republic of Chad were formally handed over to Sector 2 MNJTF in Bagasola , Chad by the Chief of Staff (COS) of the Headquarters MNJTF Col Nana Njomo Paulin who represented the FC on Monday 18 July 22. In his remarks during the handing over, the COS said the equipment were provided to improve the Sector’s capacity in the  Counter Insurgency operations in their area of operations. He urged the Sector to maintain the equipment and make judicious use of them to help secure the Lake Chad Basin areas. Receiving the equipment on behalf of the Sector, the Deputy Sector Commander, Brig Gen Omar Adam thanked HQ MNJTF for facilitating the issue of the equipment and promised to use them judiciously.

Earlier, on 7 July 22, the Deputy Force Commander (DFC) MNJTF Brig Gen Harouna Assoumane on behalf of the FC handed over the equipment allotted to Sector 4 MNJTF with headquarters in Diffa Niger Republic. In his speech, the DFC expressed his gratitude to the AU for making the equipment available and urged the Sector to always maintain the equipment to improve their combat efficiency. The event was witnessed by Commander Sector 4 MNJTF, Col Maj Sani Kiaou, and the Inspector  General of the National Gendarmerie of Niger Republic. Brig Gen Sidikou Abdou Issa. The 2 senior officers were also happy with the arrival of the equipment and thanked the AU for the donation.

Equally, the equipment meant for the  Headquarters MNJTF  arrived N’Djamena Chad safely. They were inspected by the Head of Mission  (HoM)  of the MNJTF, Ambassador Mamman Nuhu accompanied by the FC, The HoM expressed satisfaction following the detailed arrangements made for the safe delivery of the equipment to all TCCs. He said the equipment would surely lead to greater stability in the Lake Chad Basin. He wished the MNJTF more success in its operations. All the events were hitch-free and the FC has safely rejoined his headquarters in Ndjamena Chad.

(Attached are photographs of the various hand-over ceremonies)