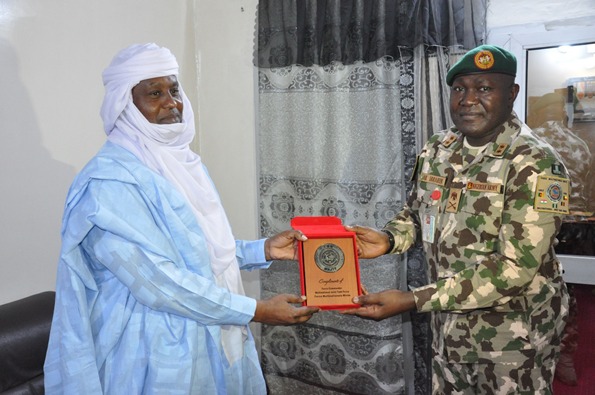 The Force Commander (FC) MNJTF, Major General Abdul Khalifah Ibrahim has concluded his maiden familiarisation/operational tour of the four sectors in the MNJTF with the last leg  being  the visit to Sector 4 Diffa in Niger Republic on 25 August 2021. The Commander Sector  4, Colonel Mamane Sani Kiaou warmly received and briefed the FC on the ongoing operations and other  matters. He highlighted major achievements ,plans and challenges, He stated the combat readiness and fighting spirit of troops of the sector, which has led to the impressive record of performances his troops.

In his remarks, the FC expressed delight with the performance and conduct of the troops in the field, which was characterized by gallantry against the terrorists. General Ibrahim stressed the need for continued collaboration and coordination as key to effective joint operations for ultimate defeat of BHT/ISWAP terrorists. He commended the selfless sacrifice and commitment of the troops, as prelude to speedy end to insurgency in the Lake Chad region. The FC reassured them of his prompt response to address the identified challenges, so as to support the ongoing operations. He informed them of impending support from the EU and other partners that would be a game changer .

In his address to troops, General Ibrahim was emphatic on the need for renewed commitment, teamwork and discipline in the conduct of ongoing operations. He charged them to be vigilant, alert and conscious of their environment, so as not to be taken by surprise by the enemy. The FC equally warned the troops against complacency especially in the face of ongoing terrorists’ defection and surrender.

While on a courtesy call to the Governor of Diffa region, His Excellency, Issa Lamine, the FC praised the initiative of Niger Republic, when it called for the formation of the MNJTF in October 2014. This clearly demonstrated the desire of Niger republic for collective action against the menace of BHT/ISWAP insurgents, he added. General Ibrahim therefore solicited for continuous logistics  and equipment support as well as strategic direction to enable MNJTF accomplish assigned tasks. The Governor expressed appreciation for the visit and pledged to mobilise public support for the success of the Force. He however, urged for better synergy of efforts and cooperation among the forces in order to achieve the desired objectives.