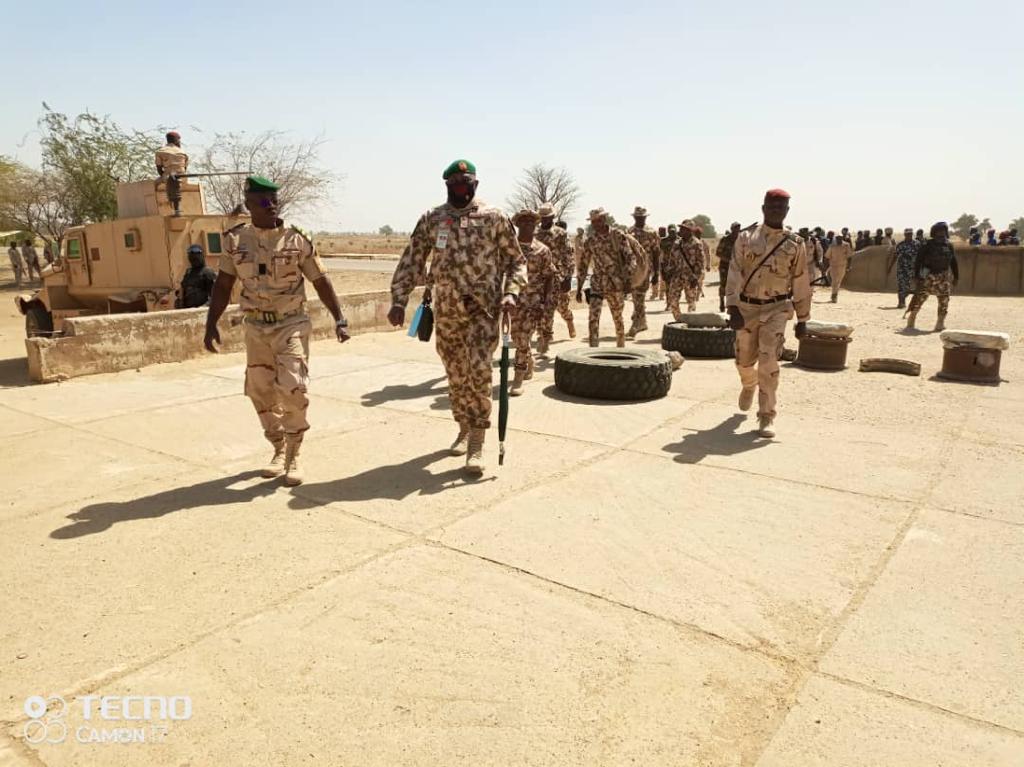 The Force Commander (FC) Multinational Joint Task Force, Maj Gen Abdul Khalifah Ibrahim made an operational visit to Headquarters 3 Battalion in Gamboru Ngala on 18 January 22. The FC was received by the Commanding Officer (CO) Lt Col AS Olasegbe . The FC and his entourage were given an operational brief by the CO and thereafter entertained by the cultural dancing groups of the Ngala community. The FC addressed troops of the Battalion and thanked them for their courage doggedness and dedication. He encouraged them to be more focused and ruthless in decimating the remnants of the BHTs/ ISWAP by supporting their CO in his operations.

He also informed them that he has been briefed on their extended stay in the mission area and he is also aware of being their former general officer commanding, he however assured them that the AHQ was working assiduously to rotate them soonest and that they should remain patient disciplined as always.

The FC then addressed the Civilian Joint Task Force and Hunters in Gamboru by thanking them for volunteering to assist the military whenever called upon and assured them that plans were underway to ensure an end is brought to the menace of the BHts/ISWAP. He also met separately with government officials and representatives of security agencies in the area.

Thereafter, the FC and his entourage accompanied by the CO 3 Battalion visited the MNJTF Sector 1 (Cameroun) troops at Wulgo. The Commander, Colonel Njock John William received the FC and his entourage and gave them an operational brief at his Headquarters. The FC commended the Commander and his men for their hard work in holding their ground in-spite of the repeated attacks by the BHTs/ISWAP. He thanked them for their service and promised to support them at all times.

The FC called for more collaboration between the MNJTF troops and the 3 Bn troops in order to rid their AOR of the terrorists. The FC then addressed the Civilian Joint Task Force and Hunters in Wulgo by thanking them for volunteering to assist the military whenever called upon and assured them that plans were underway to ensure an end is brought to the menace of the BHts/ISWAP.

The FC was taken on a guided tour of   Wulgo town where it was observed that normalcy had been restored as traders were in the markets and farmers were in their farms. The FC also had a meeting with the Theatre Commander Op HADIN KAI who was also on an operational tour of his area of responsibility. Issues discussed bordered on improving synergy and cooperation between the 2 operations. The visit was hitch-free and the FC has returned to his Headquarters in Ndjamena Chad.

In another development, the FC MNJTF Major General Abdul Khalifah Ibrahim assured the United Nations (UN) continuous collaboration and synergy with its agencies in the course of execution of MNJTF mandates. The FC made the remarks when he received a UN delegation led by the Deputy Director, Regional Operations Division, United Nations Department of Safety and Security (UNDSS), Mrs Poussin Florence, at the HQ MNJTF on 19 January 2022. General Ibrahim welcomed the delegation and expressed appreciation for the visit, which he said will surely reinforce and enhance the existing relationship. As part of the activities marking the visit, an information brief detailing the MNJTF activities was presented to the delegation and thereafter an interactive session took place.

While highlighting some of the MNJTF mandates, the Force Commander was emphatic on the positive impact of critical roles of the UN agencies and other Non-Governmental Organisations (NGOs) in the implementation of the MNJTF mandate. He added that the MNJTF facilitates the return of the IDPs and refugees to their ancestral homes, hence the urgent need for UN intervention to stabilize the situation in the Lake Chad region. “The personnel of the MNJTF across the sectors are equally engaged in retraining on Human rights and International Humanitarian laws, so as to keep abreast with contemporary global best practices,” he said.

In her remarks, while acknowledging the unique nature of the MNJTF of using a collective approach to solving the security challenges within the region, Mrs Poussin Florence thanked the FC for the detailed brief and warm reception to the delegation.

She said, UN will continue to support and collaborate with MNJTF to enable it achieve its mandates. Explaining that, the UNDSS is responsible for risk management by assessing the level of risks of any programme proposed by the UN to its different strategic partners. She commended the recorded successes of the Force, as she noted that the intensity of the terrorists’ obnoxious activities has considerably reduced in the Lake Chad basin. The visits were hitch-free.