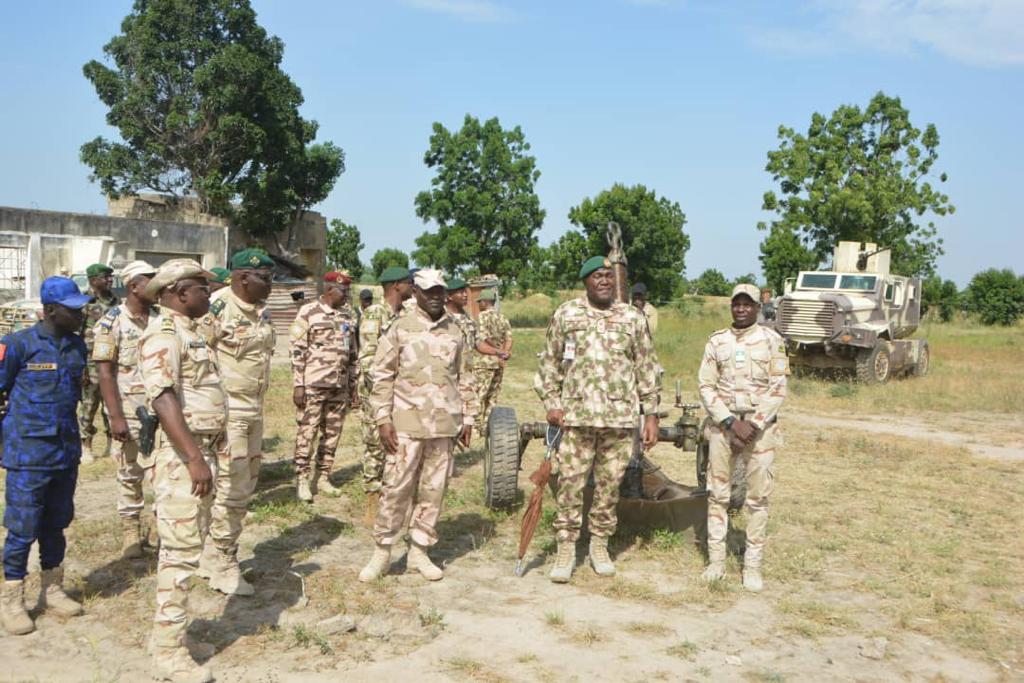 The Force Commander (FC) Multinational Joint Task Force (MNJTF) Maj Gen Abdul Khalifah Ibrahim accompanied by the Deputy Force Commander (DFC) Brig Gen Assoualai Blama and other senior officers paid an operational visit to Headquarters MNJTF Sector 1 Mora (Cameroun) on Tuesday 25 October 22. On arrival, the FC was welcomed with the traditional Honour Guard and was led by the Commander Sector 1 Col Tiokap Pierre Loti to the conference room. The Commander Sector 1 thanked the FC for providing a conducive environment for the Sector to function effectively to achieve the mandate of the MNJTF. He assured the FC of the total commitment of the Sector to take the war to the insurgents even much more than before, as plans were already underway to end their menace. The FC then received a detailed brief on the activities of the Sector which included operations, achievements, and challenges.

In his remarks, the FC appreciated the warm reception accorded him and members of his entourage. He informed them that he had also come to formally introduce the newly posted DFC of the MNJTF to the Sector. He praised the Sector for the successes recorded in recent times, their professionalism, and doggedness. He expressed satisfaction with the level of troops’ dedication to duty but urged them to do more. He praised the Commander adding that his leadership reflected in the overall troops’ performance and aggressive posture. Gen Ibrahim thanked the Republic of Cameroon for their support in the fight against terrorist activities. The highlight of the occasion was the presentation of medals to officers who participated in the last Operation Lake Sanity. Also, there was the presentation of souvenirs and group photographs.

As part of the operational visit to MNJTF Sector 1, the FC and his entourage, accompanied by the Commander Sector 1 and his Chief of Staff paid an operational visit to the MNJTF Stabilization Forward Operation Base (FOB) in Kirawa where he was received by the Commander 26 Task Force Brigade, Brig Gen DR Dantani alongside the MNJTF FOB Commander, Capt Lyon. The FC received briefs on the operations, successes recorded as well as challenges. The achievements recorded include the return of about ten thousand refugees who were formerly in Cameroun or internally displaced in Maiduguri and other places to their ancestral home in Kirawa, the capture of over five hundred (500) bicycles belonging to BH, 15 X AK 47 rifles, hundreds of assorted ammunition including 7.62mm special rounds, as well as the recovery of hundreds of cattle rustled by the Boko Haram criminals which were returned to their various owners in Cameroon and Nigeria.

Responding, the FC appreciated the efforts of the FOB Stabilization Force on the achievements recorded which have enabled the refugees to return to their various homes and allowed economic activities to thrive in their Area of Responsibility.
According to the FC, the deployment of the MNJTF FOB Stabilization Force to the area and their remarkable synergy and cooperation with troops of Op Hadin Kai has denied the Boko Haram /ISWAP Terrorists the use of the areas as a mobility corridor to ferry supplies their men. He promised to address the challenges presented to him as quickly as possible to improve their combat efficiency and urged them to work closely with troops of Op Hadin Kai.

The FC used the occasion to address the Kirawa community led by the District head Mallam Abdulrahman Abubakar. Hon Lawal who spoke on behalf of the community praised the efforts put in place by the MNJTF and Operation Hadin Kai troops to ensure total eradication of the terrorists activities in the area. He stated that normalcy is gradually returning to their community as economic activities had picked up and farming activities had flourished.

He said farmers had cultivated their lands spanning over 14km of land which was hitherto not possible and they are expecting a bumper harvest this year, the first time in over 9 years. He used the opportunity to thank the Government of Borno state for their support to the community but still requested more support from the community and the civilian joint task force supporting the military. The FC thanked the members of the Kirawa community for their cooperation with the troops but also enjoined them to provide timely information to troops in order to keep them secure. He assured them of the continuous commitment of the MNJTF to bring lasting peace to the community and the entire Lake Chad Basin region. Highlights of the visit were the presentation of souvenirs and group photographs. The visit was hitch-free and the FC has since returned to his headquarters in Ndjamena Chad. ( See Photographs attached)