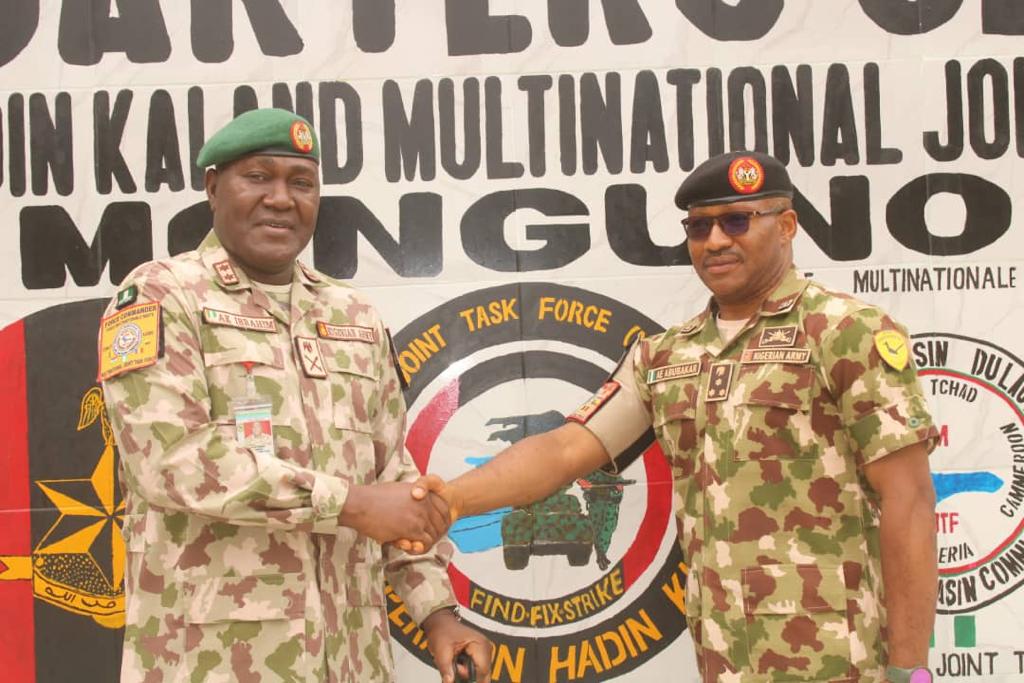 The Force Commander (FC) Multinational Joint Task Force (MNJTF), Major General Abdul Khalifah Ibrahim on Thursday 29 September 2022 paid an operational visit to Headquarters Sector 3 MNJTF in Monguno – Nigeria. He was accompanied on the visit by the Deputy Force Commander (DFC) Brigadier General Assoalai Blama (Cameroon) and other senior officers from HQ MNJTF. The FC was met on arrival by the Sector Commander, Brigadier General Abdulsalam Abubakar, his chief of staff and other senior officers of the Sector.

After the traditional welcome courtesies, the FC and entourage were given a comprehensive brief on the activities of the Sector covering operations, challenges and future intent amongst others. The Sector Commander reaffirmed the readiness of the Sector to remain proactive and ever ready to take the fight to the enemy. He highlighted major successes achieved by the Sector in cutting off the logistics chain of the terrorists with the most recent being the interception of large quantity fish and sums of money from a Boko Haram collaborator. The Sector Commander appreciated the support the Sector gets from the MNJTF as he further requested for more.

The FC in his response called for a one-minute silence in honour of gallant colleagues who paid the supreme sacrifice in the recently conducted Operation Lake Sanity 1 and indeed all other Operations in the countries of the Lake Chad Basin. He praised the gallantry and doggedness displayed by officers and soldiers of the Sector in MNJTF Operations. He stressed that though the adversary has been seriously degraded in the Lake Chad Basin Area, there is the need to totally defeat them to enable the full restoration of normalcy to the region. He added that thousands of hitherto displaced persons and refugees in other countries have returned to their ancestral homes in the region and more are on the verge of returning. He urged the Sector to prepare well for the next operation and tasked the Sector to evolve new strategies towards ending the conflict. In his address to the troops, the FC equally praised their courage in operations and urged them to do more to end the conflict while pledging his continued support.

The FC also visited the United Nations Humanitarian Hub in Monguno Town where he interacted with the humanitarian workers. He appreciated their work which is very important and assured them that all efforts would be made to ensure their safety to enable them achieve their mandate. The FC also visited the Acting District Head of Monguno Alhaji Zanna Bulama where he thanked him for the cooperation the community extends to the military and requested it be sustained and improved upon. He also urged him to use traditional channels to get the word out that for the insurgents, this is the time to totally surrender as thousands of their colleagues have done so, stressing that military operations from land, air and maritime domains would be intensified against them.

The District Head thanked the FC for the visit and said without the presence of the military, it would be difficult for them to live in Monguno. He prayed for the success of the military and pledged his continued support. The FC also used the opportunity to console with Mr Modu Wakili, the father of a Civilian Joint Task Force (CJTF) Operative who was killed during operation Lake Sanity 1 and prayed for the repose of the CJTF operative. He paid tribute to the contribution of the CJTF in the counter – insurgency operations which he said would never be forgotten. The visit was hitch free and the FC and his entourage have returned safely to the headquarters in N’Djamena Chad.