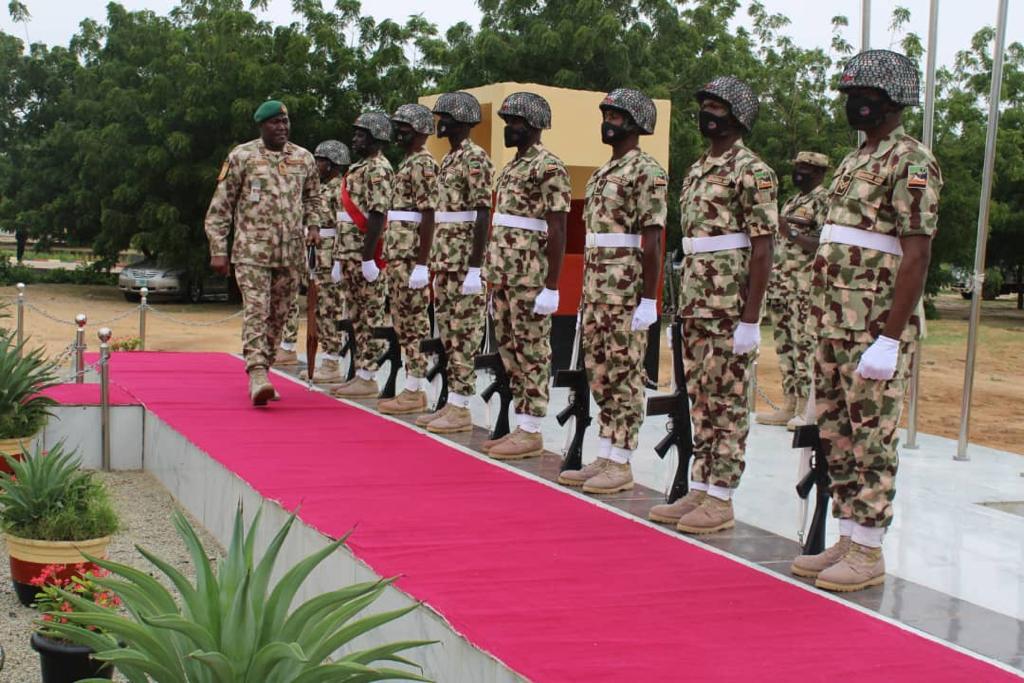 The Force Commander (FC) Multinational Joint Task Force (MNJTF) Major General Abdul Khalifah Ibrahim on Thursday 11 August 2022 paid an operational visit to the Air Component Command (ACC) and 7 Division (Sector 1) Operation HADIN KAI Maiduguri. He was accompanied on the visit by Heads of Cells of the MNJTF. The FC paid glowing tribute to the courage and professionalism of the ACC whose pilots synergized effectively with the other Air Components of the MNJTF and inflicted heavy casualties on the insurgents, their equipment, and locations noting that they have truly distinguished themselves.

He conveyed his special appreciation to the Chief of Air Staff, Air Marshal IO Amao for his consistent support to the MNJTF while also commending the Commander of the Air Component, Air Commodore EP Efanga for his doggedness, determination, and will to fight and win. He urged him to continue in this line as plans for MNJTF Operation LAKE SANITY 2 had started. The FC thereafter decorated pilots who took part in the recently concluded Operation LAKE SANITY with the highly coveted Operation LAKE SANITY Medal.

At the Headquarters of 7 Division (Sector 1), the FC commended the General Officer Commanding, Major General W Shaibu, and indeed all officers and troops of the Division for their contribution in the recently concluded Operation LAKE SANITY where the Division for the first time operated with Sector 1 MNJTF (Cameroon) under the auspices of the MNJTF and jointly cleared areas such as Arena Woje, Chikin Gudu, Bula kesa, Bagadasa, Tumbuma among other places. The FC was earlier given an extensive brief on the operational achievements of the Division and thereafter witnessed the display of a short but impressive parade during which the FC decorated the leadership of the Sector, other senior officers, and some soldiers with the Operation LAKE SANITY Medals. He appreciated and thanked the GOC and his troops for their loyalty, gallantry, and sacrifice in the course of the Operation, and having also commanded the Division recently, he was impressed with the fighting and winning spirit being maintained by the Division. He urged the Division to improve on what they had achieved until total victory is secured in the near future.

The FC rounded up his operational visit by having a chat with members of the Press. He appreciated them for their role and described them as “partners in progress” who should always be balanced in their reportage. He told them of the remarkable improvement in security in the Lake Chad Basin and in the North Eastern part of Nigeria where massive and unprecedented surrenders of over 80,000 terrorists and their families have been recorded and are ongoing daily. He said same though on a lower scale is being recorded in Chad, Cameroun, and Niger. He gave an update of areas where IDPs and Refugees had returned to their ancestral homes in the last one year and civil authority is being reestablished gradually which included Banki, Baga, Doron Baga, Cross Kauwa and Malamfatori among others in Nigeria as well as Baroua in Niger amongst other towns. He equally mentioned Amchide and Kolofata towns in Cameroon as well as Madai in Chad.

He said he is aware of plans by the political authorities in the MNJTF troop contributing countries working in synergy with the MNJTF and other critical stakeholders to return thousands of IDPs/ refugees to their ancestral homes. He said the MNJTF would continue to partner with neighbouring Operations and other strategic partners in ensuring that total peace is restored to the Lake Chad Region. He equally thanked the Chiefs of Defence Staff of the MNJTF Troop Contributing Countries and the Service Chiefs for their support and guidance. He appreciated the Theatre Commander Operation HADIN KAI Major General CG Musa and his team for the great synergy. He equally appreciated the African Union for donating equipment that would help in the current and future Operations of the Force. The events were adjudged successful and hitch-free.