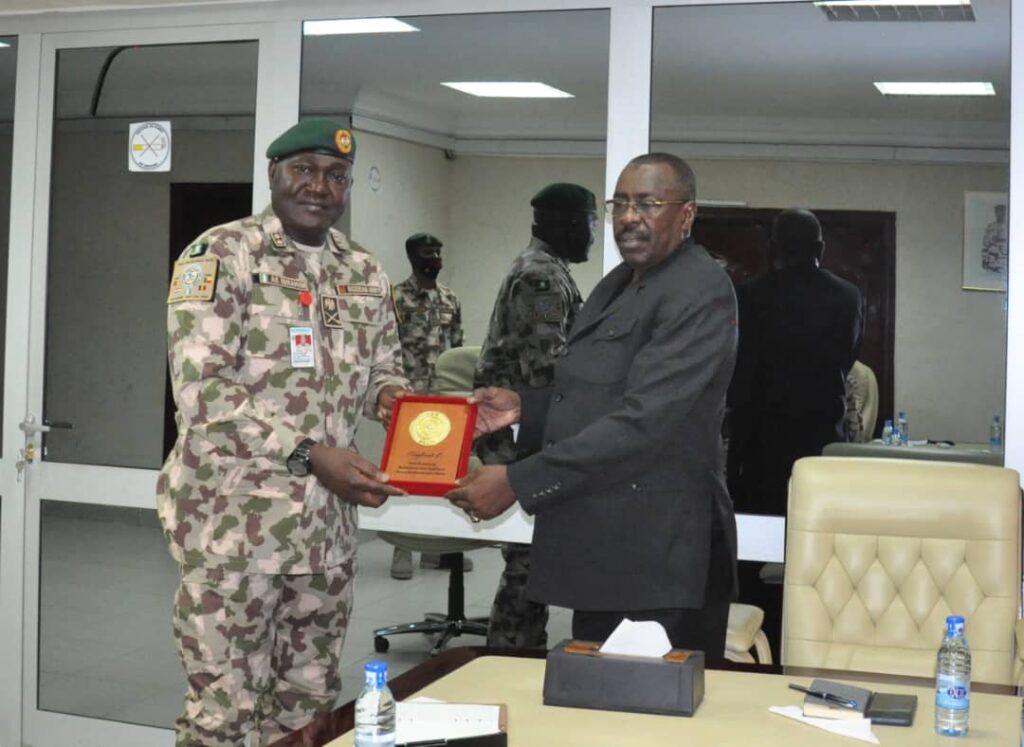 The Force Commander (FC), Multinational Joint Task Force (MNJTF) Major General Abdul Khalifah Ibrahim paid a courtesy visit to the Chadian Minister of Defence, Lieutenant General Daoud Yaya in N`Djamena Chad on 9 November 2021. The visit was part of the ongoing consultations and engagement by FC with the senior political leaders and strategic military commanders of the Troops` Contributing Countries (TCCs) of MNJTF. During the visit, General Ibrahim expressed appreciation for the warmed reception and prevailing conducive atmosphere and good working condition for the HQ MNJTF. He expressed profound grateful to the President of the Republic for all the good works he is doing in Chad.

The FC briefed the Honourable Minister on the recorded operational successes; such as the return of Internally Displaced Persons (IDPs), refugees and restoration of civil authority in some areas across the Lake Chad region. Notably, the recent return of IDPs and refugees in Baga, Doro Baga and Banki (Nigeria), Amchide and kolofata (Cameroon) and Baroua in (Niger) which were facilitated by the MNJTF troops. He also said arrangement has reached advanced stage for the return of IDPs and refugees to Mallam Fatori and return of refugees from Bagasola Chad to Nigeria. Likewise, General Ibrahim intimated the Minister on the ongoing handling of mass defection and surrender of Boko Haram/ISWAP terrorists in the MNJTF Area of Operation, in which a total of 5000 Ex-BHT/ISWAP insurgents and their families have surrendered, profiled and handed over to their national authorities.

While responding, the Honourable Minister congratulated the FC on his appointment and commended his proactive ways of consultation with strategic hierarchies of both political leaders and high military commands. He said, establishing HQ MNJTF in N`Djamena Chad is a clear demonstration of the firm belief and support of Chad for the Force to succeed. He added that, the return of IDPs/refugees is as a result prevailing relative peace and stability in the region, indication that MNJTF is working very hard towards achieving its mandates. He therefore, assured the FC of the total support of the Chadian Armed Forces to the MNJTF to tackle terrorism and rid off the insurgents in the Lake Chad region.

General Daoud Yaya urged the FC to sustain the ongoing clearance   operations, using it as a prelude for major battle engagements and eventual annihilation of the terrorists and other armed criminals. He emphasized the need for gathering and sharing of intelligence among the MNJTF troops. Adding that, sharing of intelligence can easily facilitate and hasten the total defeat of the enemy in the battle fields. The FC was accompanied on the visit by the Deputy Force Commander (DFC), Brigadier General Abdou Harouna Assoumane and some Military Staff Officers and it is hitch free.