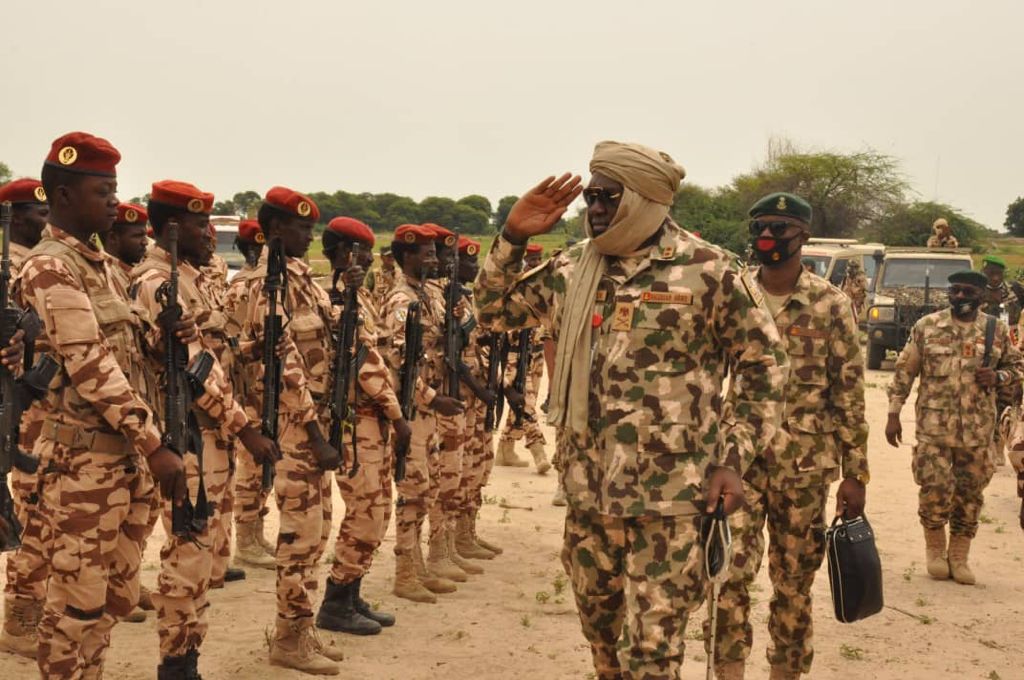 The reorganized Multi-National Joint Task Force (MNJTF) was operationalized in mid-2015 by countries of the Lake Chad Basin Commission (LCBC) comprising of Nigeria, Niger, Cameroon, and Chad.  Benin Republic also took part in the deliberations and subsequent deployment. Its mandate includes creating a safe and secure environment in the Lake Chad Basin areas affected by the activities of Boko Haram, facilitate implementation of the stabilization program by the LCBC including the return of internally displaced persons (IDPs) and refugees, and facilitation of humanitarian operations/assistance within its areas of operations.

There was a recent change in the leadership of the MNJTF in which Maj Gen Abdul Khalifah Ibrahim took over command of the MNJTF on 6 Aug 21 from Maj Gen JJ Ogunlade as the Force Commander (FC).  As part of his familiarization and operational visits, he visited Sector 3 of the MNJTF with headquarters in Monguno (Nigeria) on 12 August 2021.  In continuation of the visits, the FC on Wed 18 Aug and Thur 19 Aug 21 respectively visited Sector 1 MNJTF HQ in Moura Cameroon and Sector 2 HQ in Bagasola Chad.  He was accompanied by Principal Staff Officers of the HQ MNJTF drawn from all the participating countries.  He was briefed in Sector 1 (Cameroon) by the Sector Comd Brig Gen D Bouba and in Sector 2 (Chad ) by Brig Gen Djouma Youssouf Mahammat.

The brief covered background, operational activities, achievements, and challenges of the Sectors.  The FC was impressed by the reception accorded him and his entourage and the conduct and content of the briefings.  In his comments, to officers and men of the 2 Sectors separately, he told them he was coming with a renewed impetus and zeal to take the fight to the enemy to hasten the end of this conflict.  He praised the officers and men for their courage, resilience, and service which has decimated and degraded the insurgents and has reduced their potency.  He paid tribute to the fallen heroes of this struggle and prayed for their repose. He, however, called for renewed vigour, better synergy, better intelligence sharing, focused leadership, and coordination to enable the MNJTF achieve its mandate fully.  He said he has listened keenly to the challenges as enumerated by the Commanders and that they would be carefully looked into.

He praised the troops contributing Countries of Nigeria, Niger, Cameroon, Chad, and Benin Republic for their support and belief in the MNJTF and promised to live up to expectations.  He also thanked the LCBC, AU, and EU for the support being rendered to the MNJTF.  He said on the spate of recent insurgents surrender in the MNJF AOR and beyond, it is a welcome development and we shall continue to encourage them to surrender and come out with their weapons.  He, however, warned against complacency and urged the troops to remain on high alert and to be very cautious when dealing with the surrendered insurgents adding that international laws of armed conflict must be abided with by troops of the MNJTF at all times. He informed them that the HQ MNJTF was carefully studying the development to enable them give direction on it.

While in sector 1 Mora (Cameroon), the FC, accompanied by the Sector Commander paid a courtesy visit to the Senior District/Division Officer (SDO) of Mayo-Sava and Prefecture of Mora, Mr. Roger Saffo in his office. The SDO expressed appreciation for the visit and urged the FC to restrategize to defeat the terrorists, as now the BHT/ISWAP insurgents are changing their tactics to survive. He pledged continued cooperation and support to the military and security agencies, through collaboration. Highlights of the event were the visit to the wounded in action troops at the Sector 1 Medical Centre in Mora and hand over of the water treatment machine to the Commander.

In a related development, the Commander OP Turus (West Africa) Col Rory Shannon of the British Army paid a courtesy visit to the FC MNJTF, Maj Gen AK Ibrahim at the HQ MNJTF Ndjamena Chad on 17 Aug 21.  Discussions bordered on areas of training and capacity building among others.  The visit was cordial and hitch-free.  Same day the FC visited the Cell for Coordination and Liaisons (CCL) and the Comd Op BARKHANE , Maj Gen Laurent Michon at their base in Ndjamena, Chad. Discussions were on information sharing, capacity building, and other forms of training all aimed at restoring normalcy in the operational environment.  The FC said he will continue to partner and engage all parties till the MNJTF achieves its mission.  These were equally hitch-free and cordial. (See attached pictures).

Below are pictures from the activities.