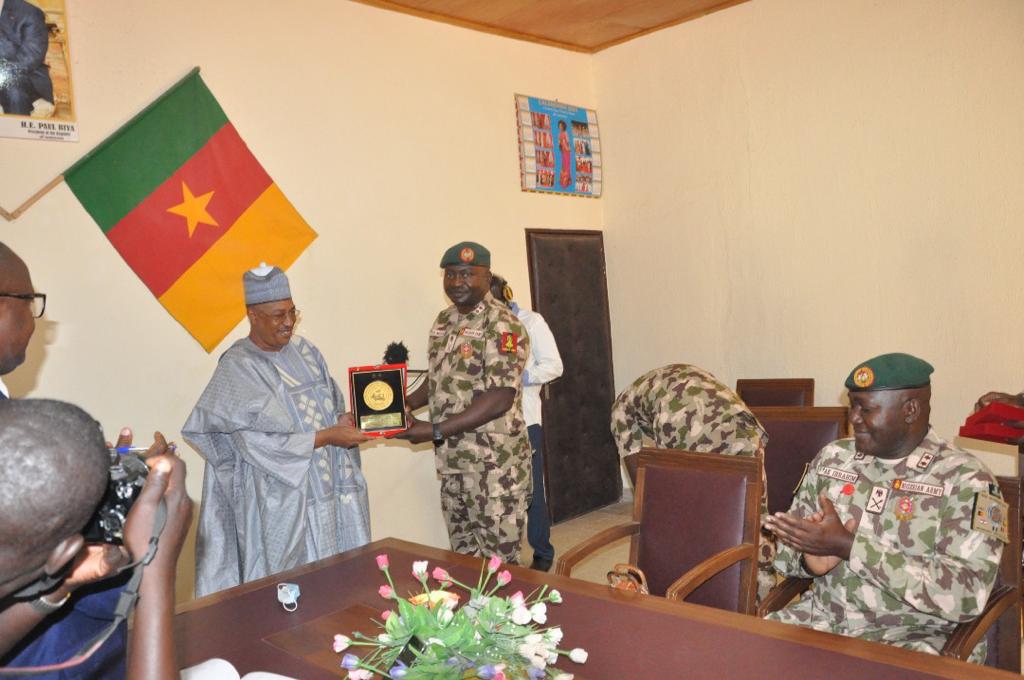 The visit commenced with a courtesy visit to the Governor of the Far North region of Cameroun , His Excellency Governor Mijhinyawa Bakri at the state house in Maroua. The TC in his remarks thanked Cameroon and it’s Armed forces for the cooperation in the fight against terrorism and insurgency which has helped to reduce the scourge of the BHT/ ISWAP terrorists. He further stressed the need for more collaboration in order to totally eradicate the menace of the BHT/ISWAP. The Governor in his remarks appreciated the Country of Nigeria and said that both countries are brothers separated by imposed borders but joined together by a common history, geography and culture. He assured the TC and the FC of more collaboration in their shared aspiration for total peace in the region.

Thereafter, the TC and the FC visited HQ Op Emergence 4 where they were given a detailed brief on their operations and other issues. The TC in his remarks said the BHTs have been surrendering as a result of the military operations of both countries forces and the in-fighting among the terrorist groups. He further stressed the need for more collaboration in the fight and also in Intelligence gathering and dissemination in order to end the menace of the BHT/ISWAP terrorists. The FC in his remarks thanked the Op Emergence 4 for their remarkable cooperation in the fight against terrorism. He further stressed the need for even more synergy among the countries of the Lake Chad Basin in order to bring an end to the terrorists and for normalcy to be restored to the affected areas. The Comd Op Emergence 4 thanked both the TC and the FC for their visit and promised more collaboration with both operations. He said the BHTs have done much damage in the region and hence the need to evolve new strategies to end the menace. He said this was one of the reason for this high level engagement.

The visit was rounded up the next day 18 November 21 with a visit to the Lamido of Maroua HRH Bakari Yerima Bouba in view of the strategic role traditional rulers play in society as guardians of the people’s culture and traditions who command respect and listening ears of their people. The Lamido expressed delight with the visit which he says shows the high regard the two operational commanders have for the traditional leadership.

He promised to continue admonishing his people to shun violence and embrace peace without which there would be no progress in the land. He further reiterated the shared values, language and culture of the two countries and said the BHTs should not be allowed to divide them. He also advised that non kinetic means be explored as other means of ending the insurgency. The TC in his remarks thanked the Lamido for the warm reception accorded the team. He promised that Op Hadin Kai would collaborate in all possible ways to ensure that peace is restored.

In his remarks, the Force Commander said that both countries share a lot and must work together to ensure there is peace so that sustainable development can take place. There were exchanges of souvenirs and a grand reception in honour of the visiting team. The visit to Maroua was hitch free and both Commanders have safety returned to their headquarters in Maiduguri and Ndjamena respectively.