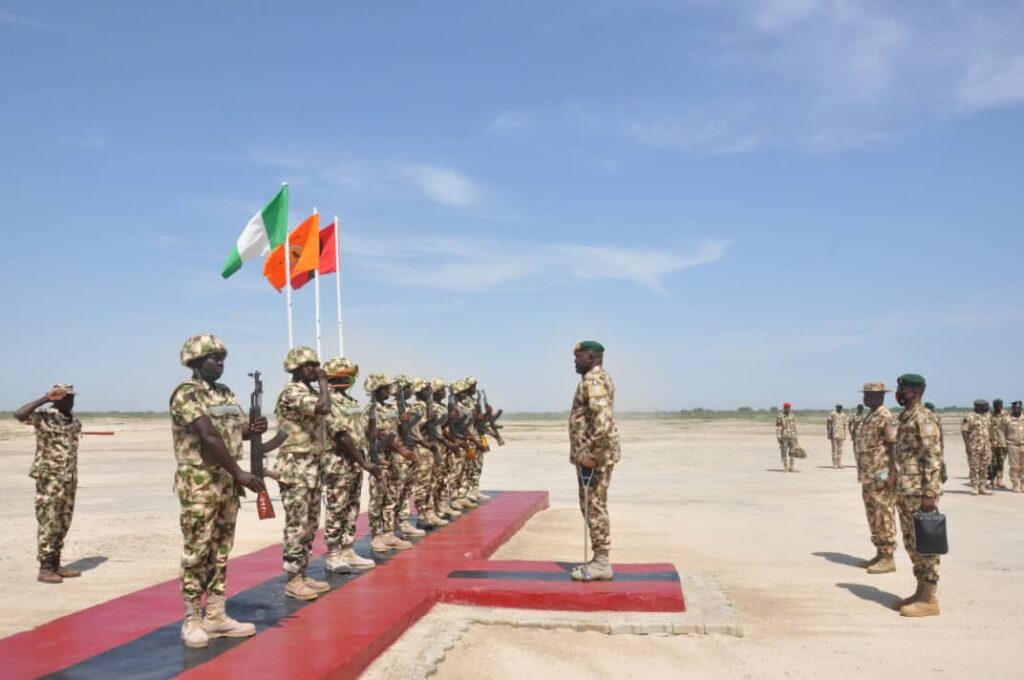 In continuation with his familiarization and operational tour to troops’ locations, the Force Commander (FC), MNJTF, Major General Abdul Khalifah Ibrahim visited Forward Operating Base at Mallam FATORI and Headquarters 5 Brigade at Damasak in Sector 3 respectively, on Thursday 30 September 2021. The visit is aimed at getting first hand information and current reality of situation in the field. He was accompanied by some Staff Officers from HQ MNJTF and Commander MNJTF Sector 3, Brig Gen GM Mutkut.

The FC was impressed by the warm reception accorded to him and his entourage. Likewise, he commended the conduct and content of the briefings which covered operational activities, achievements and challenges of both FOB Mallam Fatori and HQ 5 Brigade Damasak. It is noteworthy that these formation and unit have significantly and progressively won several tactical victories against the BHT/ISWAP insurgents in their previous encounters, thus paved the way for the resettlement and relocation of Internal Displaced Persons (IDPs) and refugees to their ancestral homes.

During his address to the troops, General Ibrahim congratulated the troops for their operational successes by dislodging their camps and denying the terrorists freedom of action within their areas of operations. He reminded them that operations remains the best test of a troop’s fighting spirit, hence good training and physical skills are essential elements in the life of a soldier. He reassured the troops that MNJTF HQ will reinforce their operational capacities with equipment and other essential materials, which will  improve surveillance and tactical manoeuvre in the fields. Finally, he reiterated his call to the troops  on the misuse of social media which does more harm than good and can also be a source of intelligence on the activities and movements of the troops to terrorists. He was impressed with the conduct of discipline and display of determination by the troops to fight Boko Haram terrorists. He however, urged them to remain on high alert and cautious so that they can swiftly end BHT/ISWAP terrorists madness and return safely home.