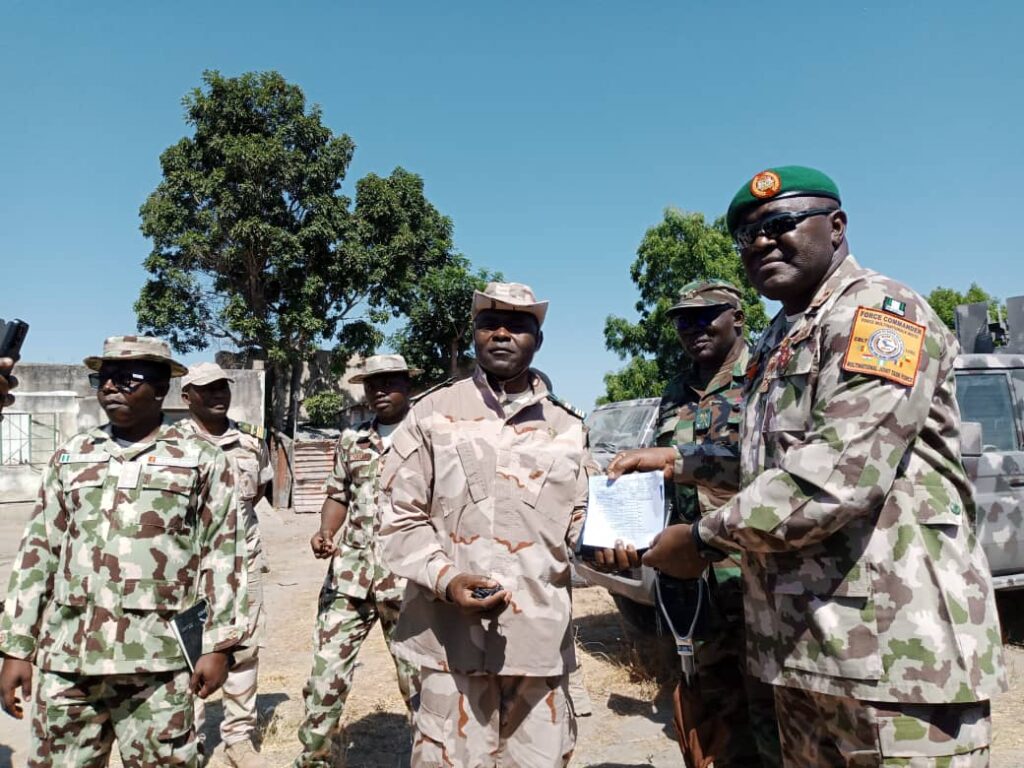 The Force Commander (FC) Multinational Joint Task Force (MNJTF) Maj Gen Abdul Khalifah Ibrahim accompanied by the Deputy Force Commander Brig Gen Assouala Blama and Commander Sector 1 MNJTF ( Cameroun) Col Tiokap Loti paid an operational visit to MNJTF Forward Operations Base Tactical Support Group in Kirawa at the Nigeria- Cameroun border area in Borno State Nigeria on Wednesday 14 December 2022. On arrival he was received by the General Officer Commanding (GOC) 7 Division, Maj Gen W Shaibu and after the traditional welcome ceremony, the GOC 7 Division thanked the FC for facilitating the donation of the combat vehicles ( Toyota Buffalo Hillux fitted for Combat) and motion sensors earlier donated. He expressed his gratitude to the Chief of Defence Staff, General Lucky Irabor and the Chief of Army Staff Lt Gen F Yahaya for making the vehicles available for use. He noted that the presence of the FOB has allowed for the return of peace and security as the population were able to conduct their social and economic activities in peace.

The FC in his remarks appreciated the synergy between the MNJTF and Operation HADIN KAI which has enabled peace to prevail in the general area. He emphasized that the cooperation and the support will continue in order to clear the remnants of Boko Haram and Islamic States of West African Province (BH/ISWAP) terrorists. Aside this, the GOC 7 Division Maj Gen W Shaibu presented the keys of the combat vehicles to the FC and thereafter the FC handed over the 4 vehicles to the Commander Sector 1, Col Tiokap Loti , Speaking during the presentation, the FC said the combat vehicles would assist the FOB towards the total eradication of the terrorists in the area. General Ibrahim commended the unit for its commitment towards ensuring lasting peace and security in its area of responsibility (AOR) by their offensive posture. He added that the additional logistics support would be provided to help in checkmating the nefarious activities of the terrorists in the area . He stressed that the provision of high value vehicles would enable the troops to effectively patrol and carry out operations within their AOR. While charging the FOB to make maximum use of the vehicles. He urged them to continue to be bold and unpredictable so that the enemy can be overwhelmed.

In his response the Commander Sector 1 thanked the leadership of MNJTF and the Nigerian military high command for the presentation and assured them that the vehicles will be put into use to achieve the defeat of the insurgents in the area.
Later there was a tour of the Kirawa town and general area after which the FC and entourage had a meeting with the traditional leadership of Kirawa. He advised them to cooperate with the troops in the area and report strange faces and suspected movement in the area. While responding, the District head Mallam Abdulrahaman Abubakar appreciated the visit and for ensuring that the community is able to return to their ancestral home after an absence of about 7 years running away from the terrorists Boko Haram sect. He said the presence of the troops has allayed the fear and threat of the terrorists activities. According to him, this has allowed their farming and other activities possible.

He appreciated the synergy between the MNJTF and their Op Hadin Kai colleagues. He appealed to the government to fix their roads and provide more amenities in the area to them as he said about 6,000 inhabitants are in Kirawa and many others are willing to return from Cameroun. Thereafter a prayer session for peace in the two countries and the Lake Chad Basin was conducted .

The visit was hitchfree and successfull. The FC has since returned safely to his headquarters in Ndjamena alongside his entourage.