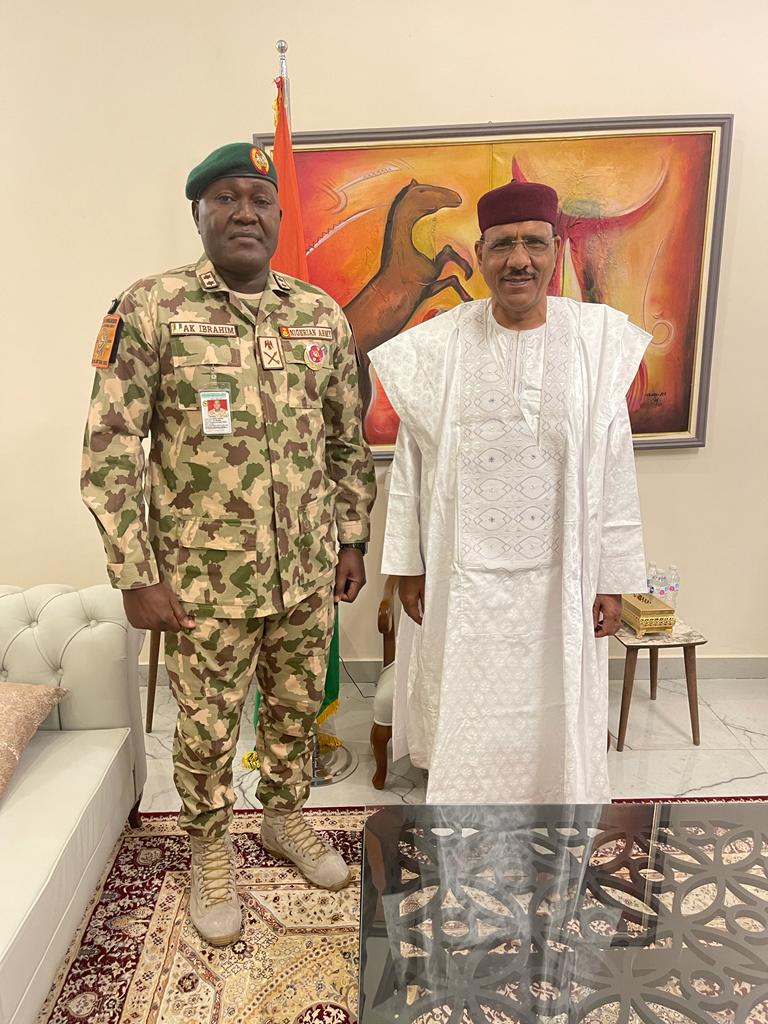 The Republic of Niger marked its 63th anniversary of proclamation of the Republic in a colourful celebration on 18 December 2021 in Diffa, Headquarters of Diffa region. The event took place in a peaceful atmosphere, following the restoration of relative peace and security in the region. The ceremony was presided over by the President of the republic His Excellency President Mohamed Bazoum.

The ceremony had in attendance the Prime Minister and the Speaker of the Parliament of Niger. Other esteemed invited dignitaries are the Prime Minister of Chad ,Mr Pahimi Padacke Albert and Special representative of the President of Nigeria Professor Babagana Umara Zulum, who was accompanied by the Governors of Jigawa, Katsina ,Kebbi, Sokoto and Yobe states.

The Force Commander (FC), Multinational Joint Taskforce (MNJTF) Major General Abdul Khalifah Ibrahim and some Military Staff Officers also attended the occasion as a Guest. Recall that Diffa town is the Headquarters of Sector 4 MNJTF, The FC was received by the Sector Commander, Colonel Mamane Sani Kiao. General Ibrahim took part in all the lined up activities of the celebration.

On the sidelines of the ceremony, the FC met with President Bazoum and Chief of Defence Staff (CDS) Major General Salifou Mody. During the meeting discussions centred mainly on improving the synergy and cooperation between MNJTF and national forces with the aim of generally confronting the scourge of the BHT/ISWAP terrorists in the Lake Chad region. Restoration of peace and security in the region will surely enhance the socioeconomic activities of the people.

Therefore, President Bazoum reiterated his total commitment to support the MNJTF to achieve its mandates. The highlights of the 63th anniversary were the march pass by the members of the Armed Forces, Police and security agencies and display of military hardware and equipment. A grand Durbar whereby the people of Diffa region displayed their rich cultural heritage was also held.

In another development, on 13 December 2021, the HQ MNJTF hosted a French military delegation comprised of students and the Directing staff from Centre of Advanced Military Studies Paris France. The delegation was led by the Director of the centre, Rear Admiral François Xavier Polderman. They were received by the Deputy Force Commander MNJTF Brig Gen Abduo Harouna Assoumane on behalf of the FC, who highlighted the various kinetic and non kinetic measures conducted which contributed to operational successes. Additionally, a detailed brief on the activities of the Force was presented and interactive session to clarify issues were conducted.

The Team leader ,Rear Admiral François Polderman commended MNJTF for the recorded operational successes and explained that, they were on tour of Sahel region, because of its strategic importance to the France and their desire to have a peaceful Sahel region adding that the MNJTF presented a perfect model of study.

Likewise, as part of capacity building to improve troops’ operational proficiency and readiness, recently ,series of trainings and courses for the HQ MNJTF military staff officers and personnel drawn from the 4 sectors were concluded in collaboration with the Centre for Coordination and Liaison (CCL) Operation TURUS, European Union (EU) Direct support and UNITAR. The training focused on Battlefield First Aids, Nautical Unit Trainers and Information Management

The Battlefield First Aids involved 64 MNJTF troops, who were impacted with the skills and knowledge to help save lives and ultimately reduce the rate of avoidable deaths on the field. While, during the nautical unit training, 60 MNJTF personnel were exposed to acquiring good aquatic skills, operational navigation, Rules of Engagement in nautical environment and requirement of the crew work, among others. All the activities ended on a hitch free note.