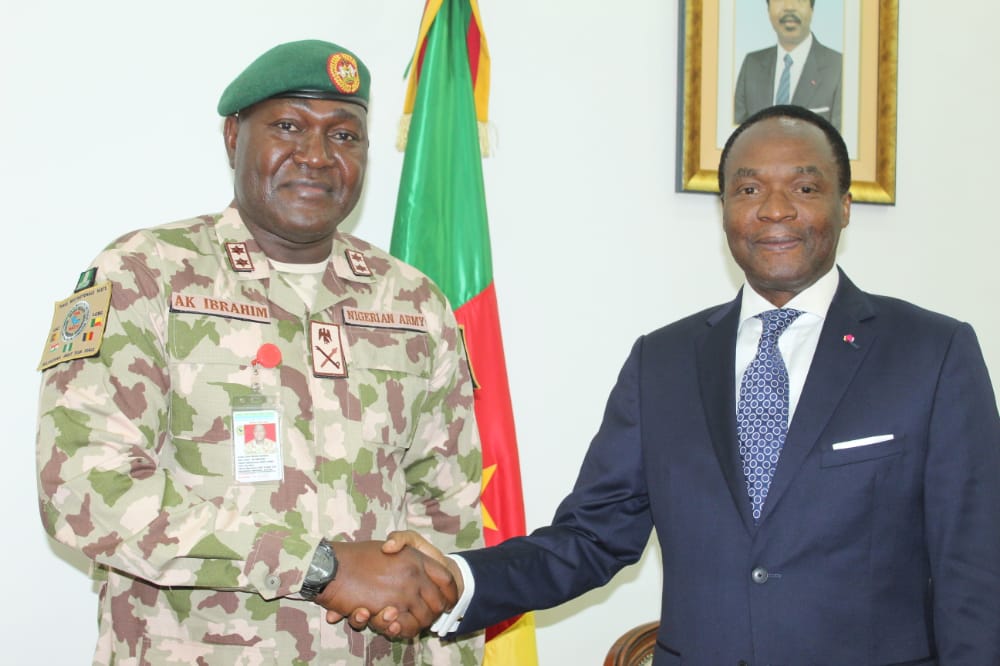 The equipment included  assorted military equipment  including armored  personnel Carriers , troop carrying vehicles, water tankers, and other combat  support equipment. These are actually meant for the African Standby Force but could be used to support the MNJTF and other AU authorized missions. In his concluding remarks, the FC thanked the AU CLB team for their professional presentation and unique storage procedures , he praised the idea of the AU CLB which he said was very strategic and timely in view of the security challenges Africa faces. He called for more support by the AU Headquarters for the AU CLB  to make it more functional.

On Tuesday 2 November 2021, the visit continued in the Camerounian capital city of Yaoundé with a courtesy call by the FC to the    Honourable Minister of Defence of the Republic of Cameroun, Honourable Beti Assomo Joseph, the Minister congratulated the FC on his appointment as FC MNJTF and wished him a successful tour of duty. He said the idea of the MNJTF shows the unity of purpose of leaders of the Lake Chad Basin region in combating the scourge of Boko Haram and terrorism in the area. He welcomed the surrender of the insurgents but warned that the fight is not yet over and there is therefore the need to remain vigilant and take the fight to the insurgents.  He reiterated the support of the Republic of Cameroun to the MNJTF in its noble cause of eradicating terrorism in the region. The FC was also in the Cameroun Defence Forces (CDF)Headquarters on a courtesy visit to the Chief of Defence Staff (CDS) Lt Gen Jean Claude Meka who was away on official assignment, the FC was however received by the Deputy CDS ,Maj Gen Chemo Hector who also congratulated the FC on his appointment and restated the commitment of the CDF in partnering with the MNJTF to ensure that it achieves its mandate. He pledged to also continue to support the AU CLB in its operations.

The FC pledged greater synergy and reinvigoration of the fight against the insurgents and briefed on recent successes in the Lake Chad region area with return of thousands of IDPs and refugees to their ancestral homes and reestablishment of civil authority to some key towns in the region and pledged to achieve even more. He paid tribute to the gallant men of the CDF who paid the supreme sacrifice in the fight against terrorism and referred to them as heroes of freedom who would never be forgotten.

Exploring the imperative and positive impact of collaboration with national forces, the  visit was rounded up with a visit to the 2nd Joint Military Region Headquarters in Doula on Wednesday 3 November 21. Discussions bordered on synergy and cooperation, The Commander , Brig Gen Eba  Bede reiterated his commitment to cooperating with the MNJTF in helping it achieve its mandate.

The FC lauded the Republic of Cameroun for being a stabilizing factor in the region and a very committed partner in the fight against terrorism. Later that evening, the Commander hosted the FC and his entourage to a dinner attended by the Governor of the Littoral State, other top government officials and senior military officers. This visit aims at improving synergy, visibility and operational efficiency of the MNJTF in its fight against the Boko Haram insurgents in its operational environment. The visit was adjudged successful and hitch free. The FC and his delegation have since arrived Ndjamena safely.