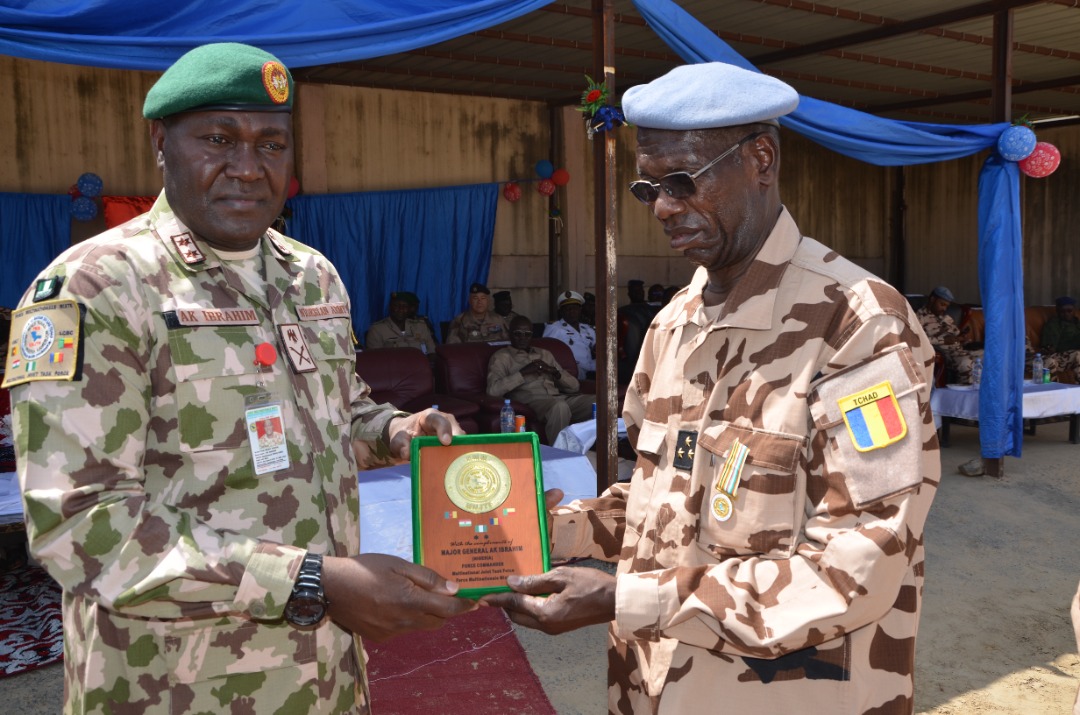 The Headquarters, Multinational Joint Taskforce (HQ MNJTF), in Camp Farcha, N`Djamena Republic of Chad on Wednesday 27 October 2021 came agog with a  colourful medal parade ceremony for the outgoing Military Staff Officer (MSOs), who have completed one year tour of duty. A total of Twenty-Four (24) MSOs from Republics of Benin, Nigeria and Chad were decorated with MNJTF medals and the Operation YANCIN TAFKI Medal in recognition of their meritorious service for peace and security in the Lake Chad region. The Force Commander (FC), MNJTF, Major General Abdul Khalifah Ibrahim noted that “Award of medals remains one of the most cherished and sacred traditions of the military and military medals are awarded in recognition of bravery or gallantry, heroism, or meritorious service“.

Speaking further, General Ibrahim said MNJTF was re-operationalized in 2015 to tackle the insurgency in the Lake Chad Basin region and restore normalcy to the affected communities. Adding that, since its inception the Force conducts operations and undertakes other non-kinetic activities towards the achievement of its mandate. He pointed out that, these operations and activities, which are coordinated at HQ MNJTF by MSOs, have yielded many successes including the liberation of communities previously held by the terrorists, rescue of thousands of captives, neutralization of countless insurgents and resettlement of thousands of refugees and internally displaced persons back to Banki town, Baga and Doron Baga in Nigeria; Amchide and Kolofata in Cameroon; and Baroua in Niger Republic among others.

Giving account of the professional handling of ongoing mass surrender of Boko Haram/ISWAP insurgents by MNJTF troops, the FC said, there is no record of mistreatment of anyone of them. He further confirmed the killing of key BHT/ISWAP leaders; Abu Musab Al-Barnawi and Mallam Bako, with assurance that the Force surely go after any successor as well as the terrorists` groups as a whole. General Ibrahim therefore called on the remaining BHT/ISWAP criminals to embrace the path of peace, by dropping their arms and surrender to security forces. He thanked the brotherly Republic of Chad for being a good host to the HQ MNJTF.

In his remarks, the Special Guest of Honour (SGOH), the Chadian Chief of Defence Staff (CDS), Lieutenant General Abakar Abdelkarim Daoud, represented by Major General G  Mandjita congratulated the recipients for the excellent performance to merit the award of MNJTF Medal. He commended the FC for the great work of ensuring return of normalcy in the region, thus creating necessary conditions for relocation and resettlement of affected communities. He assured the FC of continued safety ,security  and a conducive working environment for the MNJTF .Among the dignitaries that attended the ceremony are the Ambassadors of Niger and Cameroon, while Nigerian Ambassador was represented, the representative of Honourable Minister of Defence, the Chadian Chief of Air Staff, Representative of Head of Mission MNJTF, Resident Special Representatives of United Nations Development Programme (UNDP), European Union (EU) and African Union (AU). Others are top brass of Chadian military authorities, Defence Attaches and Advisers from Niger, Cameroon, Nigeria, United States, the representatives of Operations Barkhane, Centre for Coordination and Liaison (CCL) and G5 Sahel Joint Taskforce.

The high points of the event are the decoration of outgoing MSOs with MNJTF Medals, presentations of Souvenir and Medal to SGOH, presentation of plaques to MSOs, group photograph and refreshment. The event was hitch free.