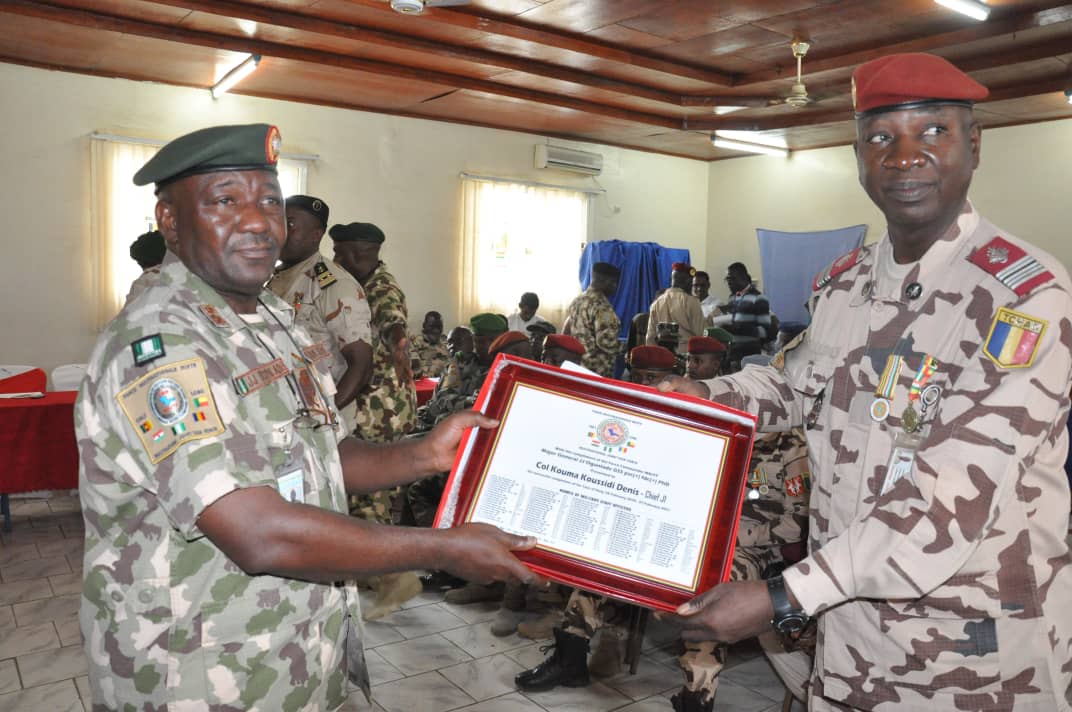 A total of Forty One Military Staff Officers (MSOs) from republics Cameroon, Chad and Niger serving at the Headquarters, Multinational Joint Taskforce (HQ MNJTF) have successfully completed their tour of duty. In a dignified and well befitting Medal parade and presentation of certificates ceremony at HQ MNJTF, the Force Commander (FC) Major General Jide Jeleel Ogunlade urged the MSOs to remain dedicated. The parade aptly signified reward for recognition of selfless duties and appreciation of excellent contributions as staff officers in the overall operational successes recorded by MNJTF in the Lake Chad region.

The FC glowingly extolled the MSOs for their meticulous works and collaborative efforts in planning the conduct of various operations with troops at the sectors’ levels. He commended their excellent and professional liaison skills, which have immensely led to significant operational and administrative feat in the theatre fields. ” More importantly is the demonstration of  perfect management and maintenance of resources from our strategic and development partners in support of MNJTF efforts for war against terror in the region” he added. Speaking  further, General Ogunlade urged them to maintain the good relationship and military brotherhood, as they remained good ambassadors of MNJTF in their various respective countries.

While congratulating the MSOs, the Special Guest of Honour and Theatre Commander (TC) Operation Hadin Kai (OPHK) Major General Christopher Musa called for more determination and resolve to jointly confront common regional enemy. He said that, Boko Haram/SWAP have done more damage and harm by dislocating the socioeconomic fabrics of the communities living in  Lake Chad region. Hence, he stressed the need to continue to forge unity of efforts in drive to eliminate insurgency and restore peace and security among the affected communities. General Musa assured the FC his total cooperation and continued partnership in progress to support the MNJTF to realise its mandates.

Among the departing MSOs are the Deputy Force Commander, Brigadier General Abdelkerim Bakhit Goni, Chief of Staff, HQ MNJTF, Col Major Moussa Mahamadou and four Chiefs of Cells. Present at the ceremony are the representative of the Head of Mission, the four MNJTF sector commanders, the Head of Center for Coordination and Liaison (CCL) and the Head and staff of AU-MST. Highlights of the event include decoration of MNJTF medals, presentation of certificates of participation and souvenirs to MSOs, as well as  decoration of TC OHK with honorary MNJTF medals.