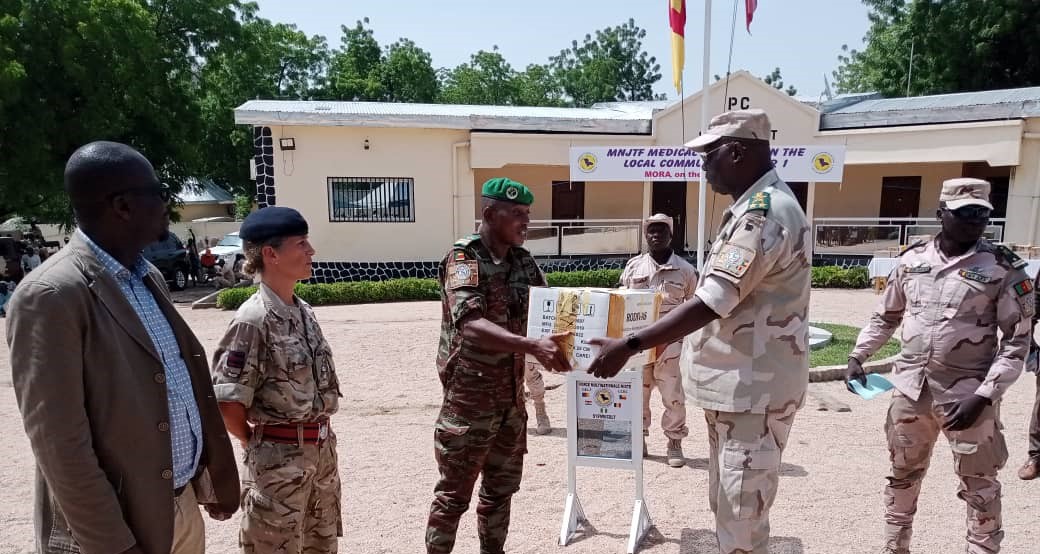 On Tuesday, 13 July 2021 in Mora, a large batch of medical kits was handed over to Sector 1 of Multinational Joint Task Force by the United Kingdom, acting in the framework of the partnership undertaken with the MNJTF in the fight against Boko Haram, within the P3 (United States, France, United Kingdom).

The delivery of these medical kits for the conduct of free health campaigns for the benefit of the local population, gave rise to a colorful ceremony at the MNJTF Sector 1 Command Post.

Indeed the delegation of donors led by Intendant Colonel Antoine HOUNKPE, representing the Force Commander, arrived in Mora by air at 08:30 with the medical kits. Alongside the Head of Delegation, were prominent Mr SALAMI Adam, Civil-Military Affairs Advisor at the LCBC; Mrs HOBSON Sigolène, Lieutenant-Colonel representing the United Kingdom at the CCL in N’Djamena, Mr TEMITOPE Famuyiide, representative of the African Union; a medical dental officer of the MNJTF staff and 02 officers of the CCL.

After the formal reception formalities by the Sector 1 Commander, the ceremony began at 09:00 with the welcome address by the Mayor of the Municipality of Mora. He welcomed the actions of the MNJTF for the benefit of local population, and in particular this support from the United Kingdom, which comes at the right time to relieve the suffering of the populations wounded by the horrors of Boko Haram.

Mr SALAMI, CIMIC Advisor at the LCBC, as well as Colonel HOUNKPE representing the Force Commander, spoke about the importance of civil-military actions in the fight against Boko Haram, highlighting the interest of the Army-Nation link in the stabilization phase. Ms HOBSON Sigolène, representing the United Kingdom in the CCL, explained that these donations were a mark of the will of her country, as well as other strategic partners gathered within the P3, to support CBLT countries engaged in the fight against terrorism.

This first phase of the speech ended with the official presentation of the donations to Brigadier General Sector 1 Commander by the representative of the MNJTF Commander, a highly acclaimed stage where population through a multitude of dance groups expressed their gratitude to donors.

Brigadier General Commander Secteor 1- MNJTF closed the ceremony with an address focusing on the thanks to MNJTF in general and to the United Kingdom in particular for this support which boosts the civil-military actions to which he attaches great interest in his area of responsibility, he pledged to make good use of these donations with feedback to donors.

Before the return of the delegation to N’Djamena, a friendly lunch was offered to all the assistance by Brigadier General Sector 1-MNJTF Commander. On the sidelines of this meal, the CIMIC Advisor at LCBC met with the community leaders present on the role of the population in the fight against Boko Haram.