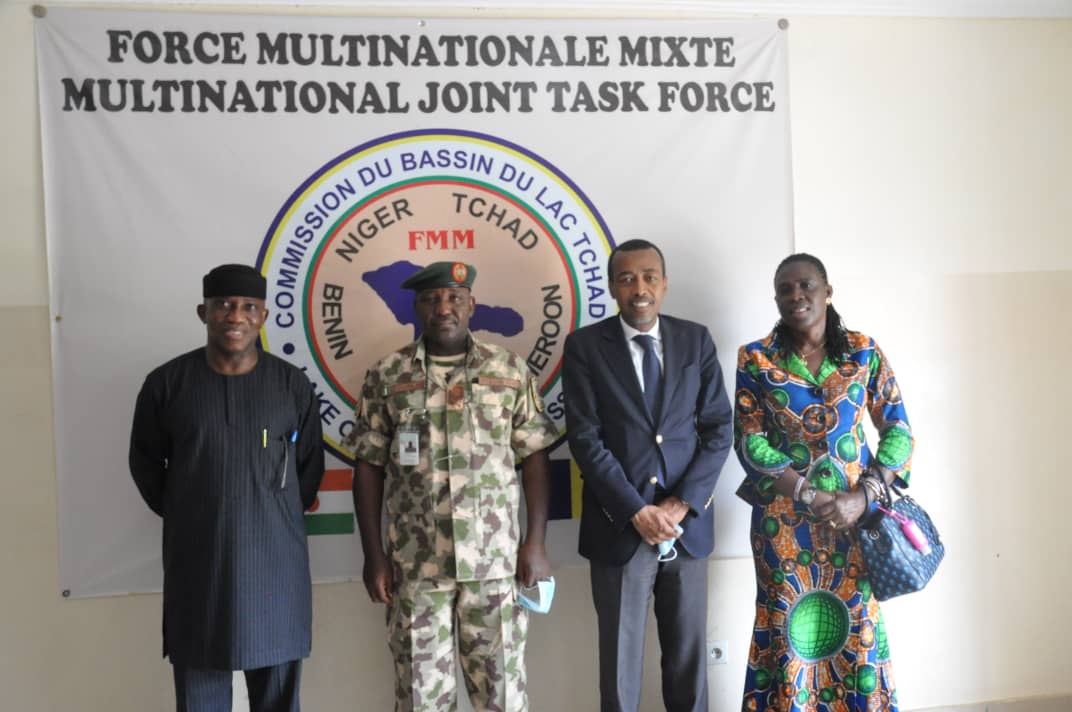 As part of the Fact Finding mission to Republic of Chad, a high powered African Union (AU) delegation, with participation of the five (5) members of the Peace and Security Council (PSC) and its Chairperson for April 2021 ( HE Ambassador Idriss M Farah), led by Ambassador Bankole Adeoye, Commissioner for Political Affairs Peace and Security Commission visited Headquarters Multinational Joint Taskforce (MNJTF) N’Djamena Chad.

Receiving the delegation, the Force Commander (FC) MNJTF, Major General Jide Jeleel Ogunlade used the opportunity to highlight the force capabilities, recorded successes and some obvious challenges. The meeting, which was held in an interactive session enabled both MNJTF leadership and AU delegation opportunity to reappraise key areas of support, with a view to strengthening its capability and capacity to conduct offensive operations against BHT/ISWAP insurgents.

Ambassador Bankole Adeoye expressed satisfaction with the level of the Force performance in the field, promising to ensure AU mobilizes more resources and other technical assistance from strategic partners and donors agencies to support MNJTF to achieve its mandates.

While appreciating the AU delegation for the visit, the FC reiterated the Force total resolve and commitment to restore peace and Security in the region, hence AU support is very imperative at this crucial time. Adding that, holding periodic consultations with regional military formations will bring to fore areas requiring immediate intervention by continental and global bodies.

It can be recalled that, MNJTF was authorized and mandated by AU in 2015 to conduct combat operations against BHT in the Lake Chad region. Since its reactivation, several offensive operations were successfully conducted which ultimately degraded and pushed the remnants of the BHT/ISWAP terrorists to the fringes of the Lake Chad basin.