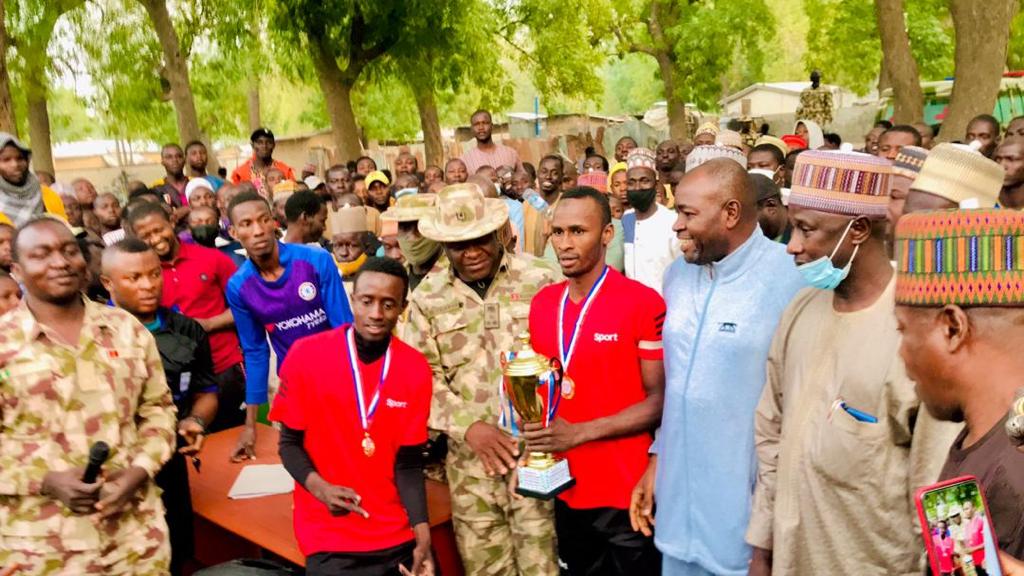 Football is recognized to be a unifying game, which promotes friendliness and social cohesion among the youths. The active participation of the teaming youths in the tournament, has demonstrated prevailing relative peaceful atmosphere in the areas, that promote cordial relationship among different segments of the local communities.

Among the dignitaries that graced the occasion were the Borno state Commissioner for Education.  Chairman Mobbar Local Government, Chairman Abadam local Government, communities leaders and thousands of football fans that trooped from Damasak and neighboring villages.

In addition to providing various jerseys to the competing football clubs, the medals and trophies by the Brigade Commander, Brigadier General lawan, the Force Commander (FC),  Multinational Joint Taskforce (MNJTF) Maj Gen Ibrahim Manu Yusuf by way of encouragement, graciously donated One Hundred and Forty Four (144)  soccer boots to share among the players.  A total of 28 matches were played during the tournament and 36 goals were scored, with Mobbar Warriors Football Club emerging as the Champion.

The competition which lasted for two (2) weeks, served as avenue to enhance the existing cordial relationship and consolidate on building trust and restoring confidence by the Brigade. The tournament has equally brought a welcomed relief and entertainment to thousands traumatized by the insurgency.

Armed Forces Remembrance Day
Thank you for your service 🎖🎖🎖

#AUPSC meets to receive updates on the situation in #Mali and to consider the renewal of the mandate of the Multi-National Joint Task Force @MNJTFOfficial - Opening statement by Amb. Amma A. Twum-Amoah @pemaks of #Ghana and #PSC Chairperson of the Month @ 1057th #AUPSC