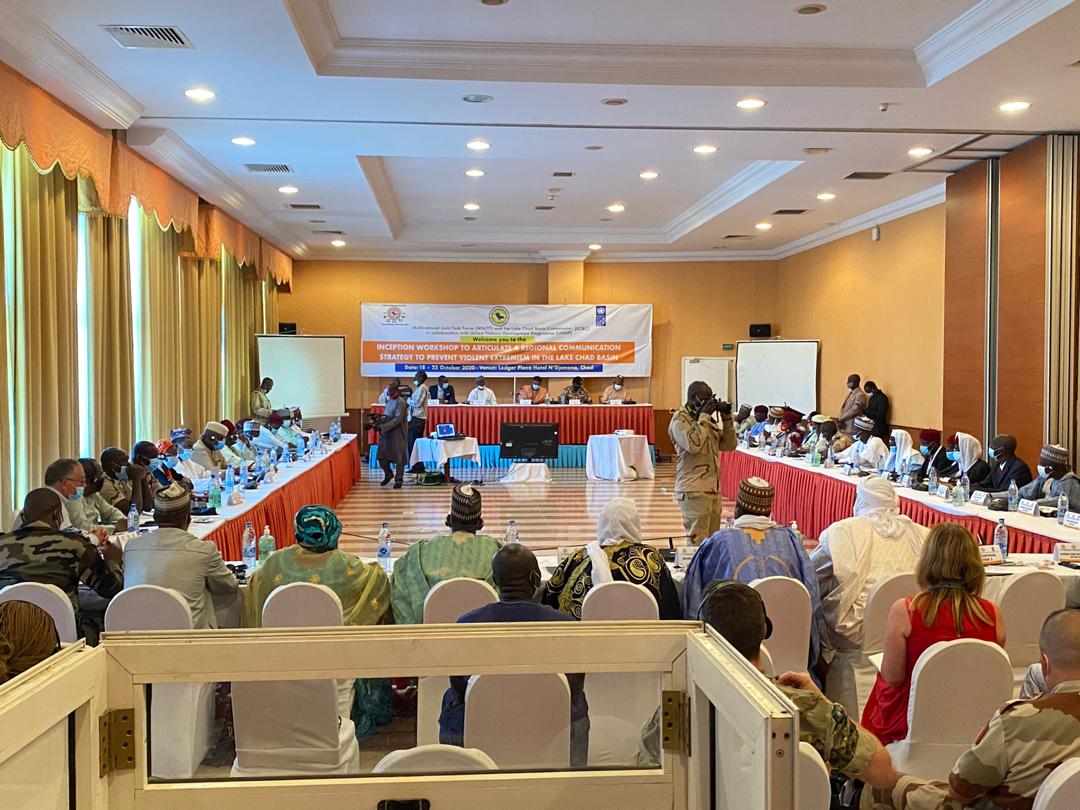 The Multinational Joint Taskforce (MNJTF) and the Lake Chad Basin Commission (LCBC) in collaboration with the United Nations Development Programme (UNDP) organised an inception workshop to provide the foundation for an inclusive regional communication strategy to prevent violent extremism in the Lake Chad Basin. This laudable and proactive initiative was in recognition of the need to reinforce transparent information and communication to prevent and replace the violent extremist ideology propagated by the Boko Haram and armed groups with constructive alternative narratives capable of restoring trust and confidence in a secured future.

In his welcome remarks, Force Commander MNJTF, Major General Ibrahim Manu Yusuf highlighted the need for a comprehensive, regional and non-kinetic strategy to complement the largely kinetic approach of the MNJTF to combat the security challenges in the Lake Chad Basin. General Yusuf acknowledged the existence of gaps in the existing communication strategy of the MNJTF, which he observed made the workshop imperative. In his goodwill message, the Executive Governor of Borno state, Professor Babagana Zulum Umara expressed support for the workshop and charged both organisers and participants to create adequate awareness among populations about local varieties of violent extremism, in order to build resilience against the destructive ideology and harmful narrative of the violent extremist group.

At the opening ceremony of the inception workshop, the Ministry of Defence of the Government of Chad and the European Union delegation to Chad commended the initiative and indicated interest in supporting the implementation of the recommendations of the workshop. Consequently, UNDP’s Resident Representative in Chad, Mrs. Lisa Singh, spoke on behalf of UNDP’s Regional Project for the Prevention of Violent Exremism in African and acknowledged the fact that military operation is not the only sustainable solution to violent extremism in the Lake Chad Basin. Declaring the 5 day workshop opened, the Executive Secretary of LCBC and Head of Mission of the MNJTF Ambassador Mamman Nuhu reinforced the calls for an effective strategic communication strategy in order to win the hearts and minds of the people of the Lake Chad Basin.

At the end of workshop, the facilitator and technical experts are expected to study the recommendations and draft the Regional approach to Strategic Communication to Prevent Violent Extremism and subject this Strategy to a whole-of-government validation process before implementation. The 4-day workshop attracted representatives of the Government of Chad, European Union, African Union and Ambassadors of MNJTF Troop Contributing Countries; Cameroon, Niger and Nigeria. Other participants included representatives from Centre for Coordination and Liaison and Civil Society Organizations.