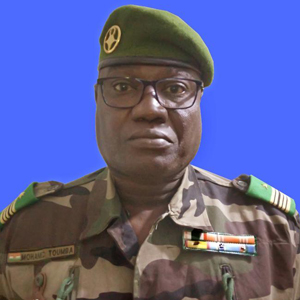 The Force Commander (FC) Multinational Joint Task Force (MNJTF) Major General Lucky Irabor, has urged troops of Sector 4 MNJTF (Diffa) Niger Republic, to be more vigilant and alert in order to avoid any surprise from Boko Haram terrorists. He made this remark during a visit to the Headquarters Sector 4 Diffa recently.

Addressing the Commander, Colonel Major Noma Dari and his Officers, the FC stated that he was in Diffa to assess troops operational readiness. He commended the Commander, his Officers and soldiers for all the contributions made in the counter insurgency operations, but emphasized the urgent need for increased surveillance, commitment and steadfastness. He assured the Sector of the continued support and assistance from Headquarters MNJTF.

Major General Irabor also paid a visit to Sector 4 health unit where he encouraged the soldiers who sustained injuries during a recent operation. He commended them for their sacrifice and wished them quick recovery.

Earlier, the Commander of Sector 4 presented a detailed brief on the activities, achievements and challenges of the formation especially in the ongoing fight against terrorism and insurgency.

The FC was accompanied on the visit by the Deputy Force Commander Brigadier General Seydou Badje, some Chiefs of Cells from the Headquarters MNJTF including: Colonels Ngwah Abdoulaye,  Sarki Bako, Oumarou Lawali, Seini Yansambou amongst others.